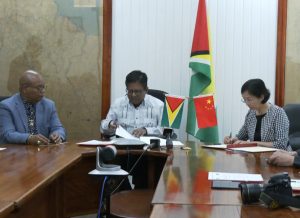 Guyana and China on Friday inked a US$192 million agreement to widen, extend and rehabilitate existing roads on the East Coast Demerara aimed at easing traffic congestion and catering for expected industrialisation at Enmore village.

China’s Ambassador to Guyana, Guo Haiyan hoped that the project would be completed on time and at a high quality. “We hope to start the construction soon and complete the project on schedule and with a high quality,” she said.  “This concessional loan demonstrates China’s commitment for common development and emphasise China’s confidence in Guyana’s development and in our bilateral cooperation,” she added.

Mr Edghill said as part of that road upgrade project, 22 culverts and 48 bridges including another bridge across the Hope Canal at the Railway Embankment Section.

“The possibilities of what will happen at Enmore in terms of industrialisation and job creation for people on the East Coast corridor, the already congested new four-lane needs to be supported by additional carriageways,” the Public Works Minister said. Government has so far not gone ahead with a promise to reopen the Enmore sugar estate but has been encouraging oil sector-related companies to invest in that area, a traditional stronghold of the governing People’s Progressive Party Civic-led administration.

He said the upgraded East Coast Demerara road network would be able to accommodate larger containerised traffic for goods that would aid in the development of Enmore as a major job creation centre.

Director of Projects at the Ministry of Finance, Tarachand Balgobin said the East Coast Demerara extension project- Phase 2- had been stopped because of the unavailability of resources.

The Chinese Ambassador to Guyana remarked that her country was keen on forging ahead with the Belt and Road Initiative. “China is willing to strengthen our cooperation in various fields under the framework of the Belt and Road Cooperation and global development initiative. We believe that the practical cooperation between the two countries will bring more benefit for our peoples,” she said.

In July, 2018, under the David Granger-led administration,  Guyana and China signed the Belt and Road Initiative but since then there has been little emphasis on moving that process forward. The United States (US) continues to frown on that Initiative, regarding it as one that China uses to its geopolitical advantage in Africa, Latin America and the Caribbean.