The Guyana Reparations Committee- an organisation that is part of the global demand for compensation for enslavement of Africans- on Wednesday expressed disappointment that The Netherlands only apologised to its former colony, Suriname, and its remaining dependencies in the Caribbean.

“We in Guyana were somewhat dismayed that our country was not mentioned in the apology by Prime Minister Mark Rutte because Guyana was a Dutch colony from 1616 to 1812, a period of 196 years,” GRC Chairman Dr Eric Phillips told the Caribbean Reparations Commission’s response titled “Apology To Action” in response to Mr Rutte’s apology. In 1814, the British had bought Berbice, Demerara and Essequibo had been bought to form British Guiana in 1831.

The GRC said that it was The Netherlands, also known as Holland, that had colonised now Guyanese territory, to which captured Africans had been taken for enslavement on cotton, tobacco and sugar plantations; at one time totalling 300.

Dr Phillips highlighted that in 1621, the Dutch government had given the newly-formed Dutch West India Company complete control of a large trading post in Essequibo. He noted that today there is still evidence of the Dutch presence in Guyana by place names such as Uitvlugt, Goed Fortuin, Vreed-en-Hoop, Vergenoegen, Vreed-en-Hoop, De Weever, Holland, Herstelling, Sparendaam, Wakenaam, New Amsterdam, Vlissengen Road, Fort Zeelandia, and Fort Kykoveral.

The GRC official said the Dutch “long legacies of Dutch colonial administration” continues to influence Guyana’s legal and land conveyancing system. Dr Phillips added that Guyana’s national hero, Kofi, had been the leader of the 1763 slave rebellion and had even written a letter in Dutch to then Governor Van Hoogenheim.

“Every Guyanese is aware of Dutch ownership of Guyana,” said Dr Phillips who is also an executive member of the African Cultural and  Development Association (ACDA). He lamented that, although Guyana is a former Dutch colony, none of the news reports on The Netherlands Prime Minister’s apology mentioned this South American nation. At the same time, he indicated that Guyana cautiously welcomed the apology, saying it is a “portal” and a “gateway” for the mental, spiritual, economic, financial, health, cultural, and psychological crises that people of African descent live with in former colonies. “With this in mind, we see the apology as the beginning of a path of constructive dialogue that will lead to repair, reparatory justice,” he said.

Dr Phillips hoped that The Netherlands government would engage civil society groups there to address harms of the past and shared benefits and reparations. 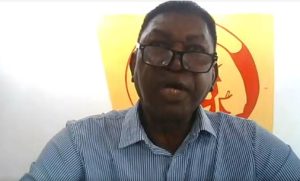 Chairman of Suriname’s National Reparations Committee, Dr Armand Zunder said the apology by the Dutch Prime Minister on December 19, 2022 did not emerge out of dialogue. “It was actually a one-way street approach,” he said, but said it was accepted in good faith. He said Guyana’s omission was pointed out to six Dutch Ministers in December, 2022 and in September, the Suriname Reparations Committee had recommended to Prime Minister Rutte that the letter of apology be drafted jointly.

The apology was also made to the Dutch Antilles of Aruba, Bonaire, Curacao, Saba, and Dutch St Maarten.  Dr Zunder noted that the apology did not extend to Indigenous Peoples in Suriname.

Dr Zunder now expects that the King of The Netherlands, as the symbolic representative of the Dutch people,  would travel to Suriname on July 1, 2023 to give an apology. He said that from January 1, 2023, talks would begin with the Dutch government.

The Netherlands’ apology for African enslavement dates back to 2001 at the United Nations Conference on Racism in D’urban, South African where a Dutch minister had issued a statement of deep remorse., eventually progressing to shame, denunciation of the past, and eventually apologies by several of the 17 cities. Among them was Amsterdam that had played a key role in financing slavery.

The Caribbean Reparations Commission plans to continue lobbying Europe as a whole for not only an apology but reparatory justice.

Chairman of the Commission, Sir Hilary Beckles said the “formal apology is significant” and an “enlightened development” but did not make mention of the survivors of that crime and so the victim community in the Caribbean and elsewhere are not stakeholders. He said the statement was being challenged because Prime Minister Rutte did not seek to mobilise Caribbean’s input and support. “It is a statement that is unilateral in its conception and execution and we are of the opinion that it is only multilateralism and full inclusion of all stakeholders that will give us the impetus that we need to move forward in a dignified way in the matter of an apology,” said Professor Beckles who is also Vice Chancellor of the University of the West Indies.

He said the Dutch pioneered slavery and made The Netherlands one of Europe’s most developed States.

The Caribbean Reparations Commission, he said, was now eager to meet with The Netherlands government to discuss reparations.