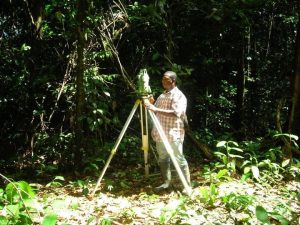 Well-known Sworn Land Surveyor Ricky Oswald Ambrose was fatally wounded in Region Seven and his licenced handgun, raw gold and cash were not found on him, and police have fended off claims by the Guyana Gold and Diamond Miners Association (GGDMA) that its response was “poor” because law enforcement agents arrived at the scene until Monday.

Police said Ambrose,40, who was also a ranger at Alphonso’s Mining and of  Lot 3093 Profitt’s Square, South Ruimveldt, Georgetown was killed on Sunday, December 18, 2022, on ‘Guana’ Sand Trail, Cuyuni River in Region Seven.

Investigators said that based on information received, at about 5 AM on Sunday, December 18, Ambrose left Arimu Landing en route to ‘Guana’ Sand Landing with his All Terrain Vehicle (ATV) #CK 3965.

However, at about 11:00 AM on the same day, a 24-year-old miner was heading from his work ground to camp-ground and was walking along the Arimu trail when he observed a body lying motionless on the ground with multiple injuries. The body was about 20 feet from the ATV, police said.

An alarm was raised, and a report was subsequently made at the Bartica Police Station.

The  GGDMA said the police only visited the area sometime on the morning of Monday December 19, 2022 to assess the scene and remove the body. “The GGDMA finds this response by the police as being poor since Arumu is not a far distance away from Bartica,” the association said.

However, the police force said the report was received at about 2:20 PM Sunday and at 3:15 PM,  a Sergeant, a Corporal, and a Constable, left for the scene via Police ATV #CL1738. However, their vehicle reportedly broke down and then ended up at a creek where they waited until Monday morning before they crossed and arrived at the scene.

“After crossing over the Mazaruni River at Teperu, the axle of the ATV broke. The three ranks quickly managed to get it fixed and continued their journey through the trail. They arrived at Arimu backdam at 00:30 and continued the journey, proceeding through a back trail to the scene, where they encountered a creek which prevented them from crossing. They remained there until daylight and crossed the creek, arriving at the scene at about 06:00 hrs this morning,” the Guyana Police Force said.

“The Guyana Police Force has taken note of a statement emanating from the Guyana Gold and Diamond Miners Association (GGDMA) as it relate to the Police response. The facts, as stated above, highlight the challenges encountered by the police ranks in getting to the scene as quickly as they could.

The body was escorted to Bartica Hospital. Additional ranks joined the team and are continuing the investigation, police added.