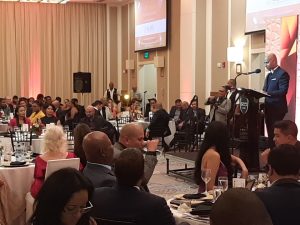 President of the Georgetown Chamber of Commerce and Industry (GCCI), Timothy Tucker on Thursday appealed t0 government to scrap the excise tax on new vehicles to allow ordinary Guyanese and the country as a whole to benefit in several ways.

While acknowledging that Guyana’s roads are congested, the Chamber said the removal of the excise tax would see Guyanese having cheaper access to new vehicles that have more safety features, emission control, lower fuel consumption, and no need for spare parts.

“The dream of owning a new vehicle by a small family is, of course, an importance,” he told the GCCI’s awards ceremony that was held at the Marriott Hotel.

As it relates to safety features, he remarked that “with 750,000 people, our people is our greatest natural resource.”

In October, 2022, the Guyana Police Force reported a seven percent increase in road fatalities in 2022 in which 85 persons died in 73 accidents up to that time of reporting.

Also, in the area of taxation, the GCCI wants better rates for income and corporate tax to increase investment, reduce tax evasion and an increase in sales and Gross Domestic growth. “We hope that by lowering taxes, the private sector will be encouraged to pay taxes,” he said.

Mr  Tucker also said the Chamber asked commercial banks to support micro, small and medium-sized enterprises looking to grow in the simplest ways. “It is paramount that we have the access to finance to play a significant role in the oil and gas sector and to realise the potential of being the engine of growth,” he said. The GCCI Chief noted that research shows that more than 50 percent of businesses need formal financing to meet basic working capital needs and less than 50 percent need financing for fixed investments and to pay off debts.