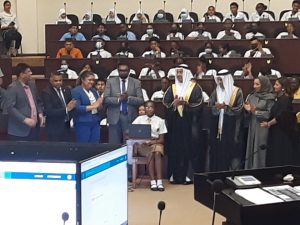 Guyana, with assistance from the United Arab Emirates (UAE), will be training at least 150,000 Guyanese school children in coding for Information Communications Technology (ICT), and President Irfaan Ali on Wednesday said he would be pushing for students in sister-Caribbean Community (CARICOM) member states to also get similar trading.

“We have discussed with this team prior visit that this coding project must be one that is available to all our brothers and sisters in the CARICOM region and Guyana is ready and willing to be that hub and to work in partnership with the UAE to make this programme to all our young people in this region because, as I said before, we take our regional resp0nsibility seriously and our prosperity must lead to regional prosperity,” he said.

With the CARICOM headquarters located in Guyana, he said this country would be used as the hub to deliver the training in coding to youts across the region.

Dr Ali said the opportunity is available to students in government-run and privately-owned schools. He also appealed to private sector businesses to open their offices and welcome children to be part of the coding programme in addition to school labs that would have to remain open after normal school hours. “You have this responsibility to share with your society,” he said.

The project, said to be the first of its kind in Guyana that would link Guyana’s economic thrust to 2030 and beyond, was launched at the Arthur Chung Conference Centre (ACCC) in the presence of hundreds of students who were invited for the event.

Talks, he said, were already underway with the UAE to have software development be part of the core component of secondary education.

With legislation expected to enacted by year-end, the President hoped that the UAE would assist in the establishment of data banks and data centers in Guyana.

Minister of Education Priya Manickchand said Guyanese, regardless geographic regions, ethnicity, religion, gender and age, would be allowed to access the ability to learn coding. “Here it is we are going to teach you to teach us on how to bring in new products for this country and for the wider world because apps and coding products are not limited to one country,” she said.

UAE Deputy Minister of Cabinet Affairs for Competitiveness and Director General of the Prime Minister’s Office, Abdulla Nasser Lootah explained that after three years, graduates of the Guyanese Coders Programme would be awarded certificates for digital skillsets such as programming fundamentals, data science fundamentals and Android fundamentals. Mr Lootah said coders would be supported by experienced mentors on a dedicated community platform.  Students would be exposed to the creation of interactive webpages, turning complex data into fascinating narratives and the acceleration of Android apps from the start. “Notably, coding is the language of the future in creating opportunities for the future generations. The code technologies are the fastest way to create new opportunities for our youth,” he said.

President Ali noted that the number of software developers globally is 26.9 million persons and Guyana is preparing young Guyanese to be part of the the new figure of 45 million by 2030.