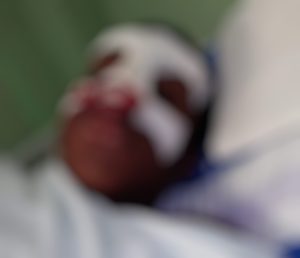 Police are investigating the brutal beating of a Christ Church Secondary School student by his schoolmates, even as he remained hospitalised recovering from severe head and facial injuries, police said.

Mr Blanhum said there were no surveillance cameras in the area where the incident occurred. The child was chased from school and beaten into an unconscious state on Wednesday, December 7 at about 2:50 PM on the Burnham Basketball Court, Carmichael and Middle Streets, Georgetown.

A man, who said he rescued the student from being further inflicted, said he later learned that the child’s brain was swollen as a result of the beating which included several kicks to his head and face. “I saw one of the students kicking and cuffing him while he was running for his life. I ran to his rescue and all I saw was the next student cuffing the child to his nose and he fell to the ground and he hit his head and he was stone cold.

He called on the Ministry of Education and the Guyana Police Force to address the incident. Police have since taken a statement from Mr Wright.

Mr Wright said one of the perpetrators escaped and he detained the other one while summoning the police and ambulance.

He later told Demerara Waves Online News that he has since given police a statement and has spoken with the Headmistress of Christ Church Secondary School. “If I wasn’t there, they might have murdered him. These children are not behaving like children,” he said.

Mr Wright also expressed concern that none of the adults who was at Burnham Court intervened to save the child.