Election results to be available in 24 hours – Nandlall; Opposition objects to removal of residency requirement 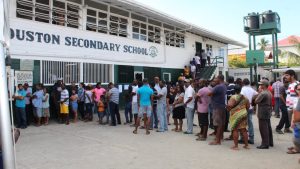 Government early Tuesday morning used its one-seat majority to pass amendments to the Representation of the People Act that would, among other things see the availability of election results in 24 hours for the first time, despite opposition calls for the law to be sent to a bipartisan select committee for refinement.

Attorney General Anil Nandlall, in piloting debate on amendments to the Representation of the People Act, told the House that the law now mandates the polling station officials to send the Statements of Poll (SOPs) to the Returning Officers (ROs), Chief Election Officer and the Chairman of the Guyana Elections Commission.

Dating back to 1992, GECOM  takes several days to declare the results of general and regional elections, with the longest being five months in 2020 after GECOM decided to order a recount of all of the votes cast due mainly to multiple declarations for Region Four (Demerara-Mahaica) in favour of the then governing A Partnership for National Unity+Alliance For Change (APNU+AFC).

The amended Representation of the People Act also provides for the break-up of Region Three (West Demerara-Essequibo Islands), Region Four and Region Six (East Berbice-Corentyne) into electoral sub-districts for the purposes of management of the electoral process and the declaration of results.

However, the opposition urged that the Representation of the People amendment Bill be sent to a bipartisan select committee as that could be substituted by public stakeholder consultations. While Mr Nandlall earlier in the debate said the opposition, as a major stakeholder, could not be ignored, government went ahead and used its one-seat majority to pass the legislation early Tuesday morning without any amendments.

Minister of Parliamentary Affairs and Governance, Gail Teixeira said the consultation process was “real” as the Representation of the Bill was available publicly,  a copy had been sent to the People’s National Congress Reform at the request of then party Chairman Volda Lawrence and comments had been provided by persons and organisations locally and overseas. However, she said so far the opposition has not submitted any comment or shown any genuine effort to contribute to the Bills.

Opposition legislator Amanza Walton-Desir and Public Service Minister Sonia Parag clashed on the need for hefty fines as much as GY$10 million plus imprisonment for certain officers if they are found guilty of breaching electoral laws.

“The fact is that this will serve to deter qualified, competent people from being employed with GECOM,” Ms Walton-Desir said. Reacting, Ms Parag said, “when they said this is going to act as a deterrent for people who are qualified, I have to ask the question: those people are coming with the intention of rigging an elections? Because if you are coming with clean intentions and you are doing your work, this shouldn’t affect you,” she said.

The amended Representation of the People Act now also mandates GECOM’s Chief Election Officer to assign sufficient polling places and polling places to take into account proximity to electors and the need to avoid overcrowding, based on the experiences in the March 2020 elections, the Attorney General said.

Shadow Attorney General, Roysdale Forde objected strenuously to the replacement of the residency requirement f0r registration with the mere provision of an address for first time residents and verification by the Guyana Elections Commission (GECOM). He said residency was important in determining where persons should vote. “It brings into the legislation a very important area now that is unclear because now they must produce proof of address. There is no recognition now in terms of what is the assessment that the Guyana Elections Commission is to engage in the verification of the address so Mr Speaker we believe that that is the area that ought to be fixed in the legislation,” he said.

Mr Forde also observed that biometrics is not included in the Bill altogether to allow for the verification of electors at polling stations before they are allowed to cast ballots.  He remarked that the amendments by the government were self-serving and did not take into account “numerous instances” voter impersonation and multiple voting as well as previous alleged infractions by a now former Chief Election Officer to calculate votes and award a seat in favour of the PPPC.

Alliance For Change (AFC) Leader Khemraj Ramjattan highlighted that the Registration Act, Representation of the People Act and the Local Government Act state that residency is a requirement for registration, in contrast to demands by the PPP more than 30 years ago. “residency requirement is written large all over the laws,” he said. He said the constitution itself gives clearance for other conditions of registration under other laws. He surmised that the government might be setting up the opposition to boycott future elections due to concerns about the bloated list that could lead to voter impersonation. “We are going to have a scenario where so many people can take advantage of the bloat,” he said. Mr Ramjattan said the opposition was not seeking to block overseas-based Guyanese from registering here as they could return before the qualifying date and do so.

He noted that recount of the votes cast in the March 2020 general elections had proven that persons had voted in the names of 88 “dead people” and 4,229 others “who were overseas and never came back.” “The Chairman sent to the the Police Commissioner and the Chief Immigration Officer and we got it how that happened,” he said in justifying the need for the Election Laws Amendment Act.

Agriculture Minister Zulfikar Mustapha said that none of the political parties’ agents for the March 2020 elections, who had signed  the 2,239 statements of poll, had complained about voter impersonation at any of the 2,239 polling stations countrywide. “There weas not one single case where there was one objection about voter impersonation,” said Mr Mustapha who is also the PPP’s Executive Secretary. He noted that electors are verified by polling station personnel and no APNU+AFC personnel had reported discrepancies.

But Attorney General Nandlall, in rebutting Mr Nandlall, said that until the constitution is possibly reformed to include residency as a requirement for registration, the Representation of the People Act has to be amended to bring it in line with the High Court ruling  that residency is not a condition to be registered and eventually get on the voters roll. “That is why we have removed the residency until we change the constitution if we wish to make residency an equation in the formula. We have t0 change the constitution or else we have to change all the laws because all the laws must conform to the constitution and that is why residency has been removed and replaced with an address at a particular location,” he added. He said GECOM would be responsible to verify registrants’ address, not residency.

He said the fundamental right to vote would be “diluted” by residency similar to the use of voter identification cards that had been ruled as unconstitutional in the 1997 general elections. Noting that the High Court has ruled that citizenship and adulthood are the only two requirements for residency, he said that was the reason for amending the laws.

The APNU has offered to support constitutional and legislative amendments to make residency a requirement as a means of cleansing the list of deceased persons or migrants.