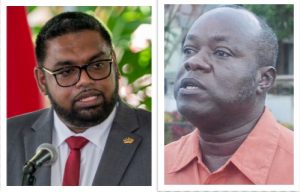 The opposition A Partnership for National Unity+Alliance For Change (APNU+AFC) and President Irfaan Ali are once again at loggerheads over government’s continued bypass of a number of opposition-controlled elected Neighbourhood Councils in engaging communities and carrying out infrastructural works.

The latest controversy is at Den Amstel, West Coast Demerara where Public Works Minister II Deodat Indar earlier this week ordered that the padlocks on the community centre ground be cut so that works on the football ground and basketball court could continue. The NDC said they were forced to secure the ground because they were not consulted about the works there although they need the improvements to be done.

The People’s National Congress Reform-led APNU+AFC coalition condemned Mr Indar’s “disrespect” for the people of Den Amstel and the apparent hiring of People’s Progressive Party Civic (PPP) associate to carry out the works at the Den Amstel ground. “When the government decides that it can take a Party hack who has no skill or experience in construction and give him a contract to do work on the community’s ground without consulting either the NDC or the management committee of the ground, then the PPP is contributing to lawlessness and disrespect to the Neighborhood Democratic Council (NDC) and the people of Den Amstel,” the opposition said in a statement.

But President Ali later accused the coalition of engaging in an “open endorsement of the blockade of development in Dem Amstel.”

The claim made is utter rubbish from the elitist, anti-development, racist propagandist in the opposition. The APNU-AFC blockade on people and community development will be continuously exposed. Their incompetence in Government and now their self-desire to stymie the development of our communities will continuously be exposed by right-thinking Guyanese,” he said.
The President made no mention of the Den Amstel NDC, but went on to accuse APNU+AFC of engaging in a “baseless attack” on Minister Indar. “The combined leadership of this anti-development cabal cannot match Minister Indar’s competence and commitment to Guyana’s development,” he said.
The President defended his and his Cabinet’s proactive, competent, highly skilled and innovative capacity and their understanding of what is it to build One Guyana, unlike the narrow minority of racist elites in the deflated APNU/AFC.
The first such difference was at a community meeting at Mocha where the President and the Neighbour Council (NDC) Chairman openly disagreed about the need to consult the locally elected body and the refusal to give clean-up grants to the opposition-controlled Neighbourhood Councils in Region Four.  Dr Ali, then, made it clear that he would be working with the people and made no reference to the Mocha NDC.
“Now and in the future, I am notifying the NDC that the ministers of this government will be visiting every community as long as it takes so at this meeting today, let me very clear at this meeting today, I am here notifying this community that the Government of Guyana that consists of a cabinet will be working with every citizen, every community, every household so don’t worry about it anymore. Notified!,” he had said.
Local Government elections for the 70 Neighbourhood Councils and 10 towns are scheduled to be held on March 13.