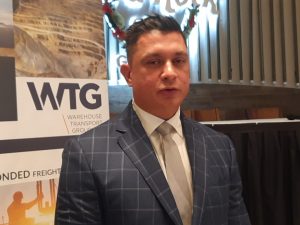 Two Canadian-headquartered companies, which have formed a Guyana-registered environmental management company, have secured a CDN$440,000 contract to construct a modern sewage treatment facility for the Sheraton-branded hotel to be constructed at Providence, East Bank Demerara, officials said Wednesday.

A few details of the contract emerged at the announcement that Warehouse Transport Group (WTG), a logistics company, has established operations in Guyana. Winning the sewage treatment contract is Guyana Environmental Services  Inc (GESI), a joint venture between WTG and BMS North America.

He said WTG has invested a lot in marketing, travel, salaries, rent and market research but he declined to immediately provide a figure. He, however, said his company planned to spend about US$45 million on the construction of cold storage facility.

Mr Burrowes said WTG was seeking to acquire land to build the cold storage plant on approximately 100,000 to 150,000 square feet. After construction, that facility is expected to store fresh and frozen items and employ up to 45 mostly Guyanese.

GESI’s Aloysius Ducey explained that the modular sewage treatment plants are  “fully plug and play” systems that could each serve up to 100 homes with a maximum power consumption of  less than 40 kilowatts. “We’re not going to be taking much energy from the system. “We have treated effluent that more than meets your regulations here in Guyana,” he said. He said the sewage would not be disposed into the sea or rivers or a rock pit, but most would be disinfected with ultraviolet radiation.

Concerning the joint venture between BMS and WTG, he said he has been visiting Guyana since 2017 and both the Canada and Guyana governments have helped him and Ryan build their partnership.

Mr Ducey said GESI intended to offer its sewage treatment facilities to the various housing development projects and the shorebases as well assemble new sewage treatment equipment in Guyana for sale to Suriname and Brazil.

Mr Burrowes said he has paternal and maternal roots in Guyana. ” There’s no secret that the government of Guyana is encouraging talented Diaspora to bring their skillsets to bear as Guyana is developing in this amazing period in its development  and Ryan is the perfect combination of a Canadian and Guyanese entrepreneurial spirit,” Canada’s High Commissioner to Guyana Mark Berman said.

WTG has grown from a one-man operation to a CDN$16 million per year operation which offers logistics, cold storage, supply chain management and several other lines of business.  WTG is a client of the Trade Commissioner’s Service.

2022-11-30
Denis Chabrol
Previous: OPINION: Venezuela and Chevron, Guyana and Exxon: the good, the bad, and the worse
Next: Businesses to get $billions in VAT refunds by yearend