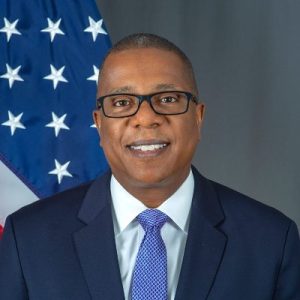 The US’ Assistant Secretary of State for Western Hemisphere Affairs Brian A. Nichols

The United States (US) late Tuesday night reiterated that it recognises the land boundary between Guyana and Venezuela, on the occasion to mark the 123-year old 1899 Arbitral Tribunal Award.

Assistant Secretary of State for Western Hemisphere Affairs Brian A. Nichols, under the Democrat administration,  made known his position a day after the anniversary of the decision of the tribunal.

“The 1899 arbitral award determined the land boundary between Guyana and Venezuela and should be respected unless or until otherwise determined by a competent legal body,” Mr Nichols said.

The International Court of Justice (ICJ) is yet to hand down its decision in the case brought by Guyana on March 29, 2018 after decades-long dissatisfaction with little or no outcome by the United Nations Secretary General’s mediation process.

Back in November 2018, the Republican US administration had for the first time categorically stated that it respected the land boundary between Guyana and Venezuela, rather than merely stating that it supported the timely resolution of the controversy.

The Ministry of Foreign Affairs said it was confident that Guyana would win the case at the ICJ which confirmed on December 18, 2020 that it has jurisdiction to hear the case. “Guyana is optimistic that the Court will decide the case in its favour, and that the validity of the Arbitral Award and the boundary will be upheld. In the meantime, it is dedicating all of its efforts to the achievement of this outcome,” the ministry said in a statement.

With lingering concerns about whether Venezuela would accept the ICJ’s eventual decision if it is not in its favour and does not recognise that juridical body, the US indicated that it does not want any conflict over the Guyana-Venezuela boundary. “The U.S. supports a peaceful resolution to this issue,” Mr Nichols said on Twitter. Venezuela has in recent years unilaterally extended its maritime boundary with Guyana, seized seismic research vessels and Guyanese fishing boats as well as violated Guyana’s airspace with fighter jets.

Venezuela has been pressing for a bilaterally negotiated settlement of the boundary with Guyana, but this former British colony has repeatedly stated that its western neighbour is misrepresenting the 1966 Geneva Agreement which ultimately refers the controversy to the ICJ.

Guyana notes that May 7, 1905, an official boundary map was drawn up by Commissioners of Britain and Venezuela delineating the boundary as awarded by the Tribunal. “For almost sixty years, Venezuela recognised, respected – and even protected – that boundary.”

In 1962 however, as Guyana’s independence drew closer and the neighbour would no longer be Britain but a fledgling State, Venezuela abandoned the path of propriety and with it the rule of law and cast eyes on Guiana’s Essequibo territory, the Foreign Ministry said.

The Foreign Ministry states that as Guyana celebrates this anniversary date of the Arbitral Award of Paris of 3rd October 1899, “we celebrate the rule of international law and the sanctity of Treaties. We celebrate that our quest for justice has led us to the hallowed halls of the International Court of Justice.”