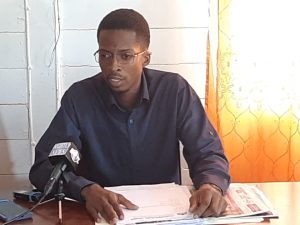 The Beterverwagting -Triumph Neighbourhood Democratic Council (NDC) on Friday vowed to ensure that 143. 10 acres of lands aback the East Coast Demerara village of Beterverwagting (BV) are not lost to a private company they believe is fronting for John Fernandes Limited (JFL) that has since publicly abandoned interest in the acreage.

The NDC Chairman, Jummaul Bagot said the council would “not be bullied into committing any act of illegality.” “We’ve made it clear that we cannot sell what we do not own,” he said. He said between 10 and 20 persons have already come forward with titles showing that they own lands in the area under dispute.

This position was made known after Mohamed and Sons and Daughters, Trading, Mining, Logging and Construction Inc; through their lawyers of the law firm Hughes, Fields and Stoby, on September 22, 2022 asked the High Court to order the Registrar of Deeds to pass the transport for the lands because the NDC has refused to pass the conveyancing.

The NDC Chairman Bagot told a news conference that the council’s position has always been that even if one villager objects to the sale of any portion of the land to which he or she has a title, the sale would not go through.

Mr Bagot provided evidence on Friday that the NDC refunded the GY$20 million that JFL had paid for the land and later said it was no longer interested in the deal.

Despite the fact that JFL had said that it was no longer going ahead with the acquisition of the land, the NDC Chairman produced a Deed of Assignment of all rights, title, interest and benefits under the agreement of sale that was entered into on May 24, 2022 by JFL’s Company Secretary Zach Gonsalves and John Mohammed Johnson on behalf of Mohamed and Sons and Daughters, Trading, Mining, Logging and Construction Inc.

It was seen by Notary Public Bibi Shadick on June 10, 2022 and registered and certified on June 13, 2022. Court records show that the law firm of Hughes, Fields and Stoby is representing Mohamed and Sons and Daughters, Trading, Mining, Logging and Construction Inc.

Mr Bagot said efforts were being made to “bully the council, trying to deceive the public at large into believing that this whole saturated situation has come to an end. Unfortunately, it has not come to an end,” he said, alluding to a newspaper notice by JFL that it no longer had any interest in the land.

But, when contacted by Demerara Waves Online News, Mr Gonsalves would only say, “we at John Fernandes are not playing any part in purchasing this land. ” He declined to say how JFL could transfer the rights for something it does nor own or whether it received the GYD$20 million refund.

The agreement of sale was inked between the NDC and JFL on November 30, 2021.

The records show that Attorney-at-Law Edrianna Stephen from Hughes, Fields and Stoby on July 21, 2022 wrote the NDC Overseer Michelle Otto on behalf of Mohamed and Sons and Daughters, Trading, Mining, Logging and Construction Inc. requesting that the conveyancing be done for the land cited in the Agreement of Sale and Deed of Assignment or face legal action within 14 days.

Representing the NDC is Attorney-at-Law Kashir Khan on August 4, 2022 told the JFL Company Secretary that further to the letter dated March 29, 2022, “this serves to confirm that it is impossible for the BV NDC to complete the conveyance with yourselves as issues have arisen with regard to the titular ownership of the land in question that puts in jeopardy the ability of the BV NDC to provide “clean title” or any title for that matter until a thorough investigation has been done,” Mr Khan told Mr Gonsalves.

On April 29, 2022, Junior Minister of Local Government and Regional Development Anand Persaud told Region Four Regional Executive Officer Donald Gajraj that since JFL had indicated that it was no longer interested in proceeding with the agreement of sale for lands at Areas F and G, Beterverwagting, the agreement should be rescinded and all monies paid are to be refunded by the BV-Triumph NDC.

Mr Bagot said when the Council sends correspondence to JFL, it receives replies from Mohamed and Sons and Daughters, Trading, Mining, Logging and Construction Inc.

Back in March, 2022, JFL’s Damien Fernandes had said his company was no longer interested in the land at BV. “No, no, no. We made a decision not to pursue that,” he had told Demerara Waves Online News. “The position is the same when it was first brought to our attention that the acreage was somewhere that shouldn’t be sold,” he had said.