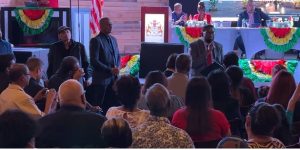 President Irfaan Ali on Saturday announced that government is considering the construction of a new East Berbice highway from Moleson Creek, Corentyne to New Amsterdam, Berbice.

No further details were provided.

He made the announcement at a meeting with Guyanese in Orlando, Florida as part of a whirlwind visit to the United States where and Caribbean leaders met earlier this week with Vice President Kamala Harris and he will next week attend the United Nations General Assembly.

Meanwhile, Dr. Ali also announced that in the coming weeks an automatic traffic offence ticketing system on the new East Bank Demerara Public Road would become operational. “You have a choice. You can do the right thing and don’t get any smile so the new posters will be ‘smile for the camera, receive your ticket with happiness’,” he said.

The Guyana government has been investing millions of dollars to build new roads along the East Bank Demerara, with one of them earmarked to link with Ogle, East Coast Demerara. Plans are also moving ahead to build a new road from Schoonord, West Bank Demerara to Parika, East Bank Essequibo.