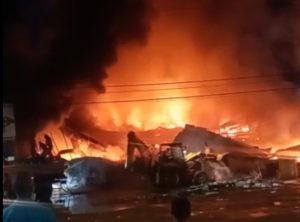 No details were immediately available, but available video footage shows fire fighters battling the flames with the assistance of one tender.

The name of the supermarket is China Star.

Mayor of Lethem John Macedo praised fire fighters, police and Guyana Water Incorporated in their efforts to fight the fire which destroyed the China Star store, one of the first buildings in the commercial zone. “I would like to take this opportunity to compliment the Lethem Fire Service team for a job well done in preventing the fire from destroying nearby buildings. There wasn’t anything they could have done to save the China Star store. Under the circumstances the officers of the fire service did their best,” he said.