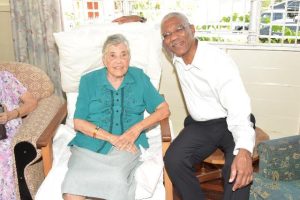 President David Granger and his former lecturer at the University of Guyana, Sister Mary Noel Menezes

Mr. Granger, who was one of her students, recalls “the rigour of her research, the breadth of her knowledge, the clarity of her instruction and the value of her advice.”

Mr Granger noted that Sr Menezes taught at the Department of History of the University of Guyana from 1967 until her retirement as a professor of history at the age of 60 years in 1990.

He also highlighted her social work as Director of the St. John Bosco Orphanage for boys in Plaisance Village and the Mercy Boys’ Home and for her service on the Council of St. Joseph Mercy Hospital.