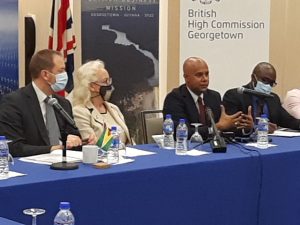 United Kingdom (UK) High Commissioner to Guyana Jane Miller said the British government was considering an assessment that could lead to the removal of visa restrictions on Guyanese travelling to that European country.

“We are looking into it at the moment. I can’t make any promises but it’s obviously something we constantly look at,” she told Demerara Waves Online News, adding that she appreciated that it is important for Guyana-UK relations.

Stressing that the quashing of visas for Guyanese to enter the UK “is constantly on my agenda”, she said the factors that would ultimately influence the decision on whether the retain or remove that travel requirement include business and most important security. “We look at issues of trade between the countries, we look at issues of security and it’s our security team that leads on the whole process,” she said.

But, already the Georgetown Chamber of Commerce and Industry (GGCI)  has said it would be formally reinforcing its request for an end to visa requirements for citizens of this former British colony because of the buoyant business activity between the two countries;.

“The Chamber would like to reiterate its long-standing call for the removal of the visa requirement that exists for Guyanese who wish to travel to the UK. The GCCI is of the view that the removal of this requirement will auger well for continued deepening of economic relations
between the countries and foster private sector development in both territories,” the Chamber said.

Ms Miller’s  comment on Wednesday night came mere hours after the UK flag carrier, British Airways, announced that it would be flying to Guyana from next year. And, Guyana’s Public Works Minister Juan Edghill noted that major revenue sources for that carrier are expected to be Guyanese cargo to the UK and the estimated 3,000 oil and gas sector works who are on rotation every few weeks.

Guyanese require visas to also travel to the US, Canada, the European Union among other countries.