Govt willing to work with private sector to lower airfares to US, Canada 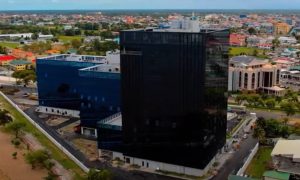 The Pegasus Suites and Corporate Centre.

President Irfaan Ali on Wednesday floated the idea of convincing the private sector to explore the leasing of aircraft to transport persons to and fr0m the United States (US) and Canada because existing carriers are charging exorbitant airfares.

“There are a number of opportunities now; a number of wet leases available… Why we don’t put our heads together- private sector- and come up with a solution; a home-grown solution to this issue; one that brings viability, sustainability and one that says clearly and specifically where the government can be of support,” he said.

Addressing the official opening of the more than US$100 million new wing of the Pegasus Suites and Corporate Centre, he invited the private sector to work with the government to explore how Guyanese can get cheaper international airfares. “Let’s put the ideas down otherwise we would not be able to build the sector in the way we want to build it,” Dr Ali said.

The President lamented that Guyana could not have a viable tourism sector if an economy plane ticket costs UDS$2,000 from Toronto to Guyana and a fluctuated air ticket price ranging from US$600 during off-peak US$2,000.

More than two decades ago, after the collapse of the state-owned Guyana Airways Corporation, a number of airlines with wet-leased aircraft had sprung up but soon after had encountered financial problems. Hundreds of passengers had been left stranded while the principals had come under the microscope of the United States Department of Transportation.

Meanwhile, owner of the Pegasus Hotel Robert Badal said the  conceptualisation of the 300,000 square foot building, called the Atlantic Tower, had nothing to do with the oil and gas sector but would now stand to benefit from that industry. “Let me say that this project was conceived long before we found oil. We are happy that oil is here and we’ll have the spin-off effects but even without oil this  was conceived prior to that,” he said.

Mr Badal, who is an auditor by profession, said the Pegasus Suites and Corporate Centre was birthed to build capacity for rooms, conference facilities and Grade ‘A’ offices. He said the 12-storey Atlantic Tower  now represented the new symbol of a “One Guyana” with its 100 executive suites. Pegasus now has a total of 230 rooms at all price levels.

The Pegasus Suites and Corporate Centre, he said, is powered by solar energy being generated from 20,000 square feet of solar roof top.

The Pegasus Suites and Corporate Centre was built by China Harbour Engineering (CHEC).