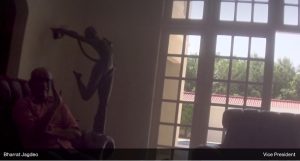 Vice President Bharrat Jagdeo during his interaction with Mr Su and the Vice News journalists who posed as investors.

Vice President Bharrat Jagdeo on Tuesday said efforts by undercover journalists posing as investors to catch him taking a bribe in his own home for a hotel and casino project have failed, but he had no qualms being involved in a range of government matters, including potential investments.

He said the fact that he could not fall prey in his own home while being secretly recorded is sufficient to prove that he was not a bribe-taker in an alleged scheme with his friend and tenant, Guyana-based Chinese businessman Su Zhi Rong. “That is why I feel so vindicated by the whole thing. I fact, it proved that in my most vulnerable moment, I did not know I was being recorded that you couldn’t find me taking a bribe from a person in my home,” Mr. Jagdeo told a news conference.

Mr. Jagdeo said the excerpt or excerpts in which he acknowledged that was his friend who looks after the agreements and he will get all the support, and he (Jagdeo) is in government and he assists from the government side might have been edited together from the 15-minute long conversation at his residence at Goedverwagting, East Coast Demerara.  Through the Vice News feature that was aired on Sunday, it became clear that Su visited Mr. Jagdeo’s residence with an undercover Vice News reporter called “Mr Chan” in order to ostensibly seal a deal for a hotel and casino. In that regard, the Vice President said the hotel and casino project was Mr. Su’s rather than a Guyana government project.

The Vice President reiterated his innocence saying, “they will never find me taking a bribe because none of that has ever happened.” Instead, he said Mr. Su has leveraged his access to him and so efforts were underway to locate and evict him from his property.

Legal action, Mr. Jagdeo, said would be taken against Mr Su for allegedly tarnishing his image by claiming that they split bribes.

On why would Mr. Jagdeo want to get involved in investment matters, he sought to defend that approach even amid concerns that he might be infringing on the responsibilities of other designated persons and agencies. “It doesn’t mean anything illegal is done or for payment. That is how we operate. The PPP is not a do-do sort of government and aloof like the Granger government… so in that process, will people capitalise on it? Yes, there may be a few but do we stop giving access to people because a few corrupt and unscrupulous people try to rip off others? The answer is no,” he said.

The Vice President reasoned that instead of “Mr Chan” speaking with Mr Su in a foreign language, he could have offered him (Mr. Jagdeo) money and that would have been the ‘catch you moment’. Instead, Mr. Jagdeo questioned why “Mr Chan”  continued to chat with Mr Su in Mandarin about an offer to which Mr Su replied that they he would collect the cash and that he (Mr Jagdeo) was “clean” and he would wait for bigger things to give him money.