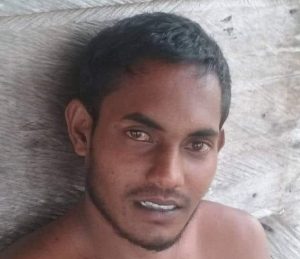 An operator at Toolsie Persaud’s logging company at Tiger Creek, Essequibo River area was shot dead by a co-worker as a result of an accusation between the assailant and another man over claims of one of them “looking” at his wife, the Guyana Police Force said.

Dead is 29-year old Rohit Hansraj called ‘Master’, of Wakenaam, an island on the Essequibo River. He was allegedly shot by a 35 year-old co-worker of Alikie, Essequibo River at about 2 PM on Saturday, May 28, 2022

Investigators were informed that Hansraj and two other workers were consuming alcohol at the area when the suspect approached one of the other workers and accused him of “looking” at his wife.

Hansraj reportedly intervened and managed to get the suspect to return to his cabin, but police said the assailant returned and opened fire on Hansraj.  “The suspect, shortly after, retuned with a shotgun to the cabin. Hansraj and the suspect became embroiled in an argument during which the suspect discharged a round from the firearm which struck Hansraj to his upper left shoulder area. The suspect then escaped into some nearby bushes with the said firearm,” police said.

The police were subsequently informed and upon arrival at scene, the body of the deceased was seen laying face-up clad in a blue trouser and grey jersey. The body was examined and a gaping wound was seen to the upper left shoulder.