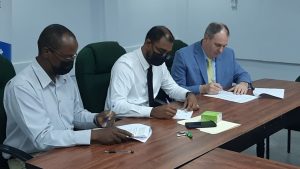 The Guyana Telephone and Telegraph’s (GTT) is moving to phase out its reliance on contracted fibre-optic cable technicians, and employ its own who will be promoted and paid increased salaries based on training and performance, company and union officials said Wednesday.

Speaking at the signing of an accord between GTT and the Guyana Postal and Telecommunication Workers Union (GPTWU) in the presence of the Chief Labour Officer of the Ministry of Labour,  GTT’s Chief Executive Officer Damian Blackburn admitted that last October’s 6 percent pay increase wasn’t “quite sufficient”  and so workers would be paid an additional 2 percent retroactive to 1st February, 2022.

He said that from January 2023, there would be a six percent increase in salaries with provision for a review if inflation increases “more than we expect or thought.” “That’s giving the company the certainty and the foundation on the basic pay of two years. We’re delighted that the union agreed with our proposals that a two year period of discussion would give a little bit more certainty to the company  as it works through this transition,” he said. After the 2024 ad 2025 pay increases, he said the deal would be reviewed.

The President of the GPTWU, Harold Shepherd said in addition to the 2 percent from February 2022,  workers would get an 8 to 9 percent increase in salaries over the next seven months. That, he said, would be due to an additi0nal 6 percent from 2023, and additional one percent for those who perform exceptionally well in 2022.

Those who obtain more than 80 percent marks at the end of a six -month course would be promoted from Technician 1 to Technician 2 and would move from the midpoint one scale to that on another scale. He said that from 2023, technicians would receive incremental movement along the scale until they reach to the end of the scale. He said new entrants would also be promoted from Technician 2 to Technician 1 after training and personal development after serving three years.

The GTT Chief Executive Officer announced that the telecoms company was planning a “transformative training programme” to provide technicians with fibre-optic skills of the 21st century.  In that regard, he said the company would be employing its own fibre technicians.  “It’s very important that we bring in-house some things that we have been doing with contract staff and we have done a great job and we’ll need them still to some degree as we go through a large amount of installation work that’s got to happen,” he said. 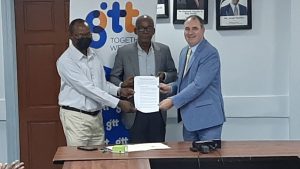 Mr. Blackburn explained that under the agreement with the GPTWU, as the technicians become more skilled, serve the company longer and reach “individual targets”, “they will get pay-increase in a very transparent manner and we’re committed to doing that.” “They will also be promoted automatically to recognise their new skillsets and that will lead to extra remuneration from January 2023.”

The telecoms company’s boss highlighted the important role of workers and their bargaining agent. “It’s always been part of my thought process that unless the union and the union members are fully onboard with our mission, then there is no way that GTT can succeed so I’m delighted to be able to work with the union team

Mr. Shepherd praised Mr Blackburn f0r the considerable progress in resolving outstanding issues such as movements along the pay scale. “It goes to show that GTT fully understands the importance of ensuring the technical staff, the important role they have to pay within the company. I would call them the foot-soldiers of the company because they are the ones that interact with the customers on a daily basis and obviously they are the ones that sell GTT service as well because they are the field staff,” he said.