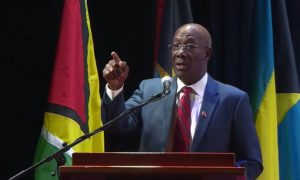 Trinidad and Tobago’s Prime Minister Dr Keith Rowley on Thursday said there was need for sanitary and phytosanitary standards f0r agricultural produce, but cautioned that they should not be used as non-tariff trade barriers to the disadvantage of the majority.

“Phytosanitary guards we need, yes, to ensure that we don’t spread disease unnecessarily among ourselves but they are not to be barriers to the explosive increases that can come if we move out of the comfort zones that exist now but comfort zones for the few at the expense of the many,” he told the opening of the Regional Agriculture Investment Forum and Expo.

The stance by the leader of that twin-island nation’s came as the Georgetown Chamber of Commerce and Industry (GCCI) urged the Guyana government not to sign a memorandum of understanding with the Trinidad and Tobago until that gas-rich nation removes non-tariff barriers on Guyana’s meats, vegetables and fruits. Vice President Bharrat Jagdeo on Thursday said government would prefer to sign an accord with Trinidad and Tobago as a “pathway” to resolving the issues.

Dr Rowley stressed the need to increase food production but cautioned that those interested market protectionism could seek to obstruct the free movement of goods through the Caribbean Community (CARICOM) Single Market regime. “We must do what has to be done to increase production but that increase in production is going to do something:- it’s going to disturb the status quo of the current arrangements and that status quo, if it is not onboard and inboard, is going to dominate the conversation on protection and we will not get it done,” he said.

They spoke at the opening of the  Forum and Expo. With CARICOM food import bill now more than US$5 billion per year, Antigua and Barbuda’s Prime Minister, Gaston Browne said there is no reason for non-tariff barriers such as those related to plant and animal sanitary rules. “We must also resolve to act urgently in our own interest, including honouring the terms of  our CARICOM Treaty and not permitting breaches of it by, let’s countries that from time to time impose these illegal non-tariff barriers on goods particularly products from other member states,” he said.

The Prime Minister of Barbados, Mia Mottley says increased food production is linked to freer trade rule. She cited the need for a modernised sanitary and phytosanitary regime must be modernised to ensure that safe foods can enter , circulate and exist the single economic space efficiently. “In Barbados, we have a responsibility also, to be m0re agile with respect to those things that we do  to allow goods into our territory from the region as we will expect every other territory in the Caribbean so to do because if we don’t make the steps now to remove the barriers, God knows how we can create the productive base that President Ali has so masterfully drafted for us in terms if the plans to expand productivity  and to expand production, she said.

Dominica’s Prime Minister Roosevelt Skerritt  called for several rules to be scrapped in order to guarantee market access and provide opportunities for farmers to increase production.

A GCCI source said Guyana is limited  in its ability to export products to Trinidad and Tobago because there is no clarity on the requirements by that twin-island nation or there is a “poor or lack of communication with the counterpart agencies in Guyana regarding the actions taken by Trinidad.” Instances of non-tariff barriers include removal of crowns from pineapples, de-stemming of peppers, ban on importation of poultry meat from Guyana, fumigation requirements, application of hypochlorous acid on eddoes, trans-shipment of honey, denial of importation of items already approved for importation through permits among others.