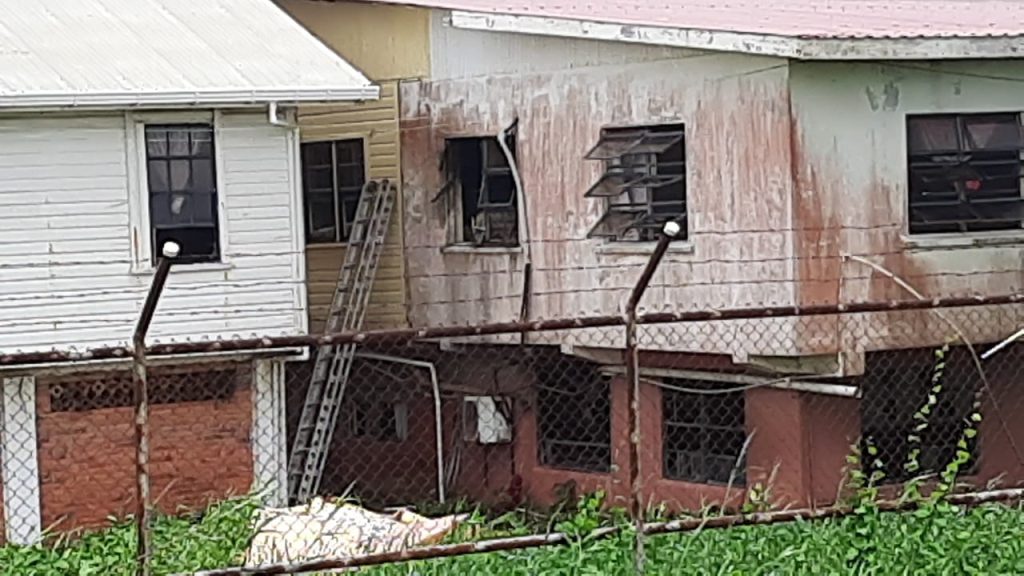 Police and fire fighters were Monday afternoon trying to determine the cause of a fire at the Narcotics Section of the Guyana Police Force’s Criminal Investigations Department, officials said.

Police Commissioner Clifton Hicken said the fire would would cause “some degree of inconvenience” but it would not affect police operations and no narcotics are stored there. “There is a (Forensic) Lab (in the vicinity of the University of Guyana) so we don’t keep exhibits at the Police Force Narcotics Branch anymore ,” he told Demerara Waves Online News.

Fire Chief Gregory Wickham said five fire tenders from various stations across Georgetown were dispatched to the scene after a call was received at about 10:20 AM. “On arrival, they noticed smoke and fire coming out from the building on the ground floor in a room that is located north-east of the entire structure,” he said. While firefighters brought the blaze under control, he credited members of the police force who used extinguishers to control the fire until the arrival of the fire fighters.

Fire fighters were up to late Monday afternoon combing the debris at the area in an effort to determine the cause of the blaze. Officials were tight-lipped about the impact of the fire, but police sources said some paper was destroyed and others were saved.

Mr Hicken said he was informed that there was “minimal damage” and the place was soaked.

This is the third fire to have struck a Guyana Police Force location in the city over the past two  years. The others were the destruction of the Brickdam Police Station Complex and the construction department  which was housed in the same building with the unaffected section where the Director of Public Prosecutions Chambers is located.

The upper flat of the back building at CID headquarters appears to house living quarters. What seemed to be two mattresses were seen in the yard.