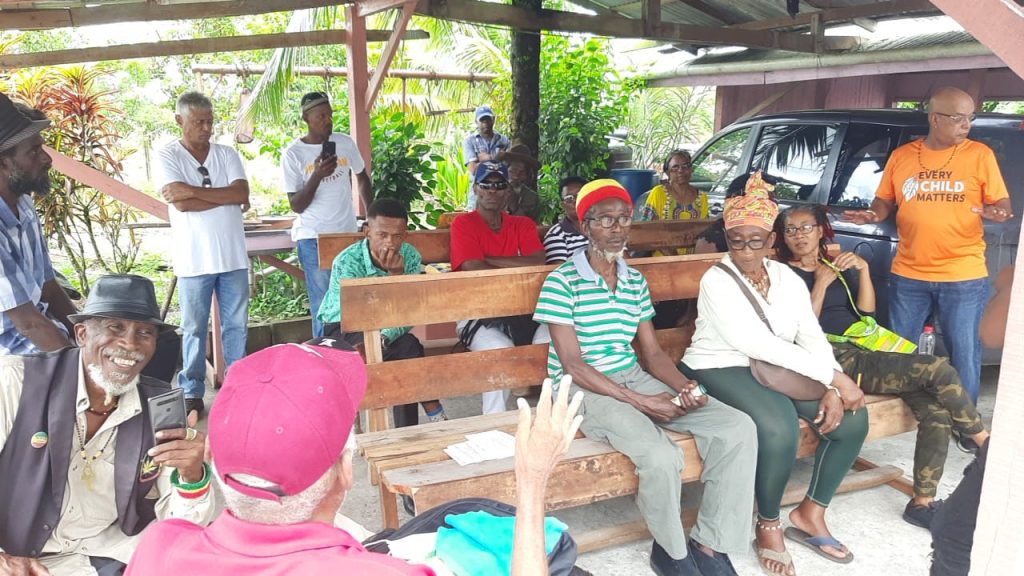 Prospective hemp farmers along the Soesdyke-Linden Highway on Sunday said they want government to give them the greenlight to produce that herb there rather than merely confine cultivation to Region Six (East Berbice-Corentyne) and Region 10 (Upper Demerara- Upper Berbice).

Under the banner of the one-month old Hemp Farmers Association of Guyana (HFAG), Leon Saul, they plan to formally request their inclusion in a letter to Vice President Bharrat Jagdeo that would be copied to the Guyana Hemp Industries Inc (GHI).  Mr. Saul questioned why “can’t we be in the first roll out” to which GHI Vice President Michael Kirton said “I’d prefer you direct that question to the Vice President.”

“Can’t we get him to start up here too-Region Four – Linden- Soesdyke Highway? We are ready to go. Can’t the Task Force intercede on our behalf?,” asked Mr. Saul. Mr. Kirton requested that HFAG submit a petition. “I would like the Hemp Farmers Association of Guyana to prepare a document with signatures to the Vice President, asking him if the Highway could be added to the Region 6 and 10,” he said.

That decision was taken at a meeting of prospective farmers and executives of HFAG and GHI held at Ferrier’s Shop, Kuru-Kuru, Soesdyke-Linden Highway.

But already, the GHI Vice President said “we hope” that after the first two crops in Regions 6 and 10, government would allow “countrywide cultivation.” He said “meantime, we are encouraging persons in other areas to put themselves in order” to obtain licences, acquire or rent land.

He wants to see the Highway become a “hemp hub” for Guyana especially since there would be cheap and easy transportation by land and water.

The meeting also benefitted from inputs from contributions from HFAG’s Chief Executive Officer,  Matthew Bruce who is based is New Jersey, United States and has been planting hemp for the past three years. Also participating in the discussion were Canada-based HFAG associate, Patrick Chanderbhan of Guyanoil Inc. and GHI Vice President Michael Kirton.

Noting that the Guyana government has been educating Guyanese in Regions 6 and 10 about the difference between hemp and marijuana, Mr. Kirton said the GHI’s Chairman Vernon Bedessee, himself a hemp producer, has begun plans to import and install a hemp processing unit in Region 6. Also, according t0 Mr. Kirton, there are 20 investors who are lined up to manufacture paint, paper and hempcrete from hemp.

Mr. Kirton repeatedly praised the People’s Progressive Party Civic (PPPC) for moving fast on the legalisation of hemp compared to the the then governing coalition of A Partnership for National Unity+Alliance For Change which he said “took us up and down with no results.” “The GHI and the Task Force openly commend the Irfaan Ali government for the initiative they had taken in making hemp legal in Guyana,” he said, stressing that the administration was “fully committed” to the creation of a hemp industry.

The GHI official quoted unnamed experts as saying that the expected yield from hemp is GY$6 million per acre.

Questions were raised about the viability of hemp cultivation for small scale farmers if owners of large acres shift from rice farming to hemp. One of the attendees was evidently impatient with Guyana’s pace while big countries like the United States (US) and Canada forge ahead with production of 500 acres or more to meet growing demand. “My thing is not fear. My concern is why are we moving so slow towards it…I think they are playing games,” he said.

Another participant urged him to conduct more research about the process and demand for hemp, even as he said investors were lined up to establish factories and mills to process hemp. “This takes months and drags on for years and now it’s coming to the end of that time so if you don’t have patience now, simply just go and plant something else,” he said.

Mr. Saul recommended the creation of a “land bank” that would include lands from prospective farmers with whom investors would be obliged to engage.