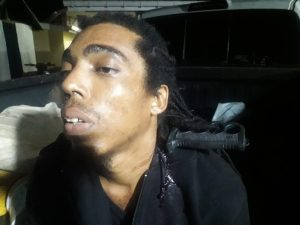 Samuel Gouveia with knife in neck.

A man, who was convicted for manslaughter and sentenced to 18 years, 9 months imprisonment, was recaptured after he turned up at the Mahdia Hospital with a knife in his neck, the Guyana Police Force said.

Twenty-seven year old Samuel Gouveia, who is regarded as a “high-profile prisoner”,  was arrested one year after he escaped from the Mazaruni Prison.

Gouveia was reportedly wounded at about 11:30 PM on May 9 at Mowasie Landing, Konawaruk in Region Eight (Potaro-Siparuni).

“It is alleged that Gouveia had a heated argument with an identifiable male over money and the male stabbed Gouveia to his left-side neck, resulting in the knife being stuck in his neck,” investigators said.

Gouveia was escorted to the Georgetown Public Hospital as a patient under guard.

Police said he aas positively identified by a Prison Officer, as well as by records and tattoos to his left hand.