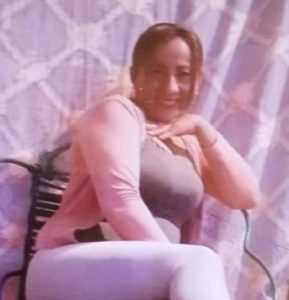 Venezuelan woman has been chopped to death and buried in a shallow grave at Eteringbang, Cuyuni River.

Police say her reputed husband has since been taken into custody to assist with investigations.

The woman has been identified as 49-year old Deissy Antury Perdomo who was a clothes vendor and small-scale gold miner.

Investigators say that she was killed between April 23 and 26 at Cores Backdam.

Police say that Perdomo’s body was found in a four-foot wide hole, partly covered with mud and dry leaves.

Her reputed husband has been identified as Vladimir Marquez who left Venezuela on April 22.

On April 23, police say that she and two other Venezuelan men were seen heading to Eteringbang Landing where they shopped and consumed alcohol.

On the same date,  Perdomo and the two men were again observed heading in the Backdam towards the direction of their camp.

Police say that her reputed husband returned from Venezuela on April 26 but was not able to contact his wife and search of the area was conducted.

The two other Venezuelan men, who were last seen on April 24, have since left for Venezuela.