Guyana now has bigger dredge to prepare for oil sector; Demerara River to get two-way channel 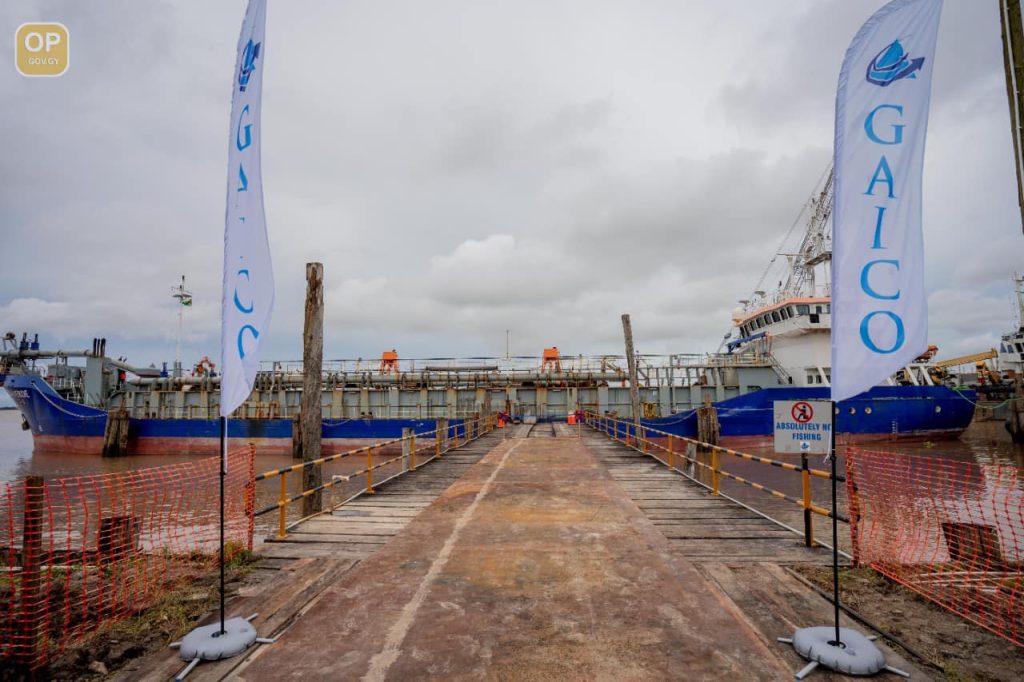 The dredge that has been acquired by GAICO Construction

Guyana’s public and private sector now has a large US$10 million dredge available in-country that would be used to clear the country’s major waterways to accommodate larger and more oil-sector related vessels and the eventual construction of a deep-water port, officials said Saturday.

Already, President Irfaan Ali said based on current marine traffic in the Demerara River, government is aiming to facilitate-two way movement of vessels. “Just using the projection of the most basic of growth in this river, within five years, less than five years, we have to get that to two-way, we have to create a two-way channel,” he said.

In the long-run, he said there would be need for a diversion facility in Demerara River.

Chief Executive Officer of GAICO Construction, Komal Singh said the dredge could clear the Demerara River channel to allow for 24-hour access. “That need now is becoming more and more critical with Guyana becoming an oil producing nation. It is imperative for us to have some of these rivers dredged and to allow deeper draught so vessels can get in and out of our channel so we can all enjoy better economies of scale for our importation,” he said at the commissioning ceremony for the dredge.

The top American, British and Indian envoys here were among those who attended the event at GAICO’s Nismes, West Bank Demerara wharf facility. Mr. Singh hoped that that wharf would be a “fully certified port facility” by  the end of July or August after waiting for  a “simple permit” since 2017.

President Ali also told the commissioning ceremony for the new vessel that the major constraint of a shallow river draught has been a disincentive for large cruise ships to dock at Port Georgetown,  and flood-affected farmers in the Pomeroon River often cite the need for the mouth of that waterway to be dredged.

The Shipping Association of Guyana (SAG) has for decades been complaining about the high cost of imports and exports aboard smaller vessels because the 6-metre depth of the Demerara River is insufficient and needs to be at least 10 metres to accommodate larger cargo and other ships. “One of our biggest problems that affect our competitiveness  are shipping rates; our freight rates in this country. When you compare our rates with other countries in the Caribbean, we are twice and it’s because of the river channel and I know dredging would help to alleviate that,” said Chairman of the Private Sector Commission, Paul Cheong.

Dr. Ali said GAICO’s investment has both de-risked that type of service and would also see more than 70 percent of the GY$40 million annual maintenance cost being pumped into local welding, machining and fitting shops.

Public Works Minister Deodat Indar said increasingly construction materials would have to be transported by barge at a cheaper cost and so the waterways have to be dredged.

The GAICO Chief Executive Officer lamented that a tug and barge with long-reach excavators, a cutter head dredge and trailing suction hopper dredge have been used for just under 40 percent  because those concerned were not proactive to dredge. But he said his company has decided to invest in the largest dredge to date because of the upswing in infrastructural and other works. “Now that we all the new developments that the government is pushing for Guyana and for every single region without exception, we have decided to invest in a larger dredge,” he said.

He said the large dredge and a brand new cutter edge dredge together value US$10 million form part of a “bold new investment” because of government’s support for the private sector.