Parika Market roadside vendors to be moved after tarmac is built 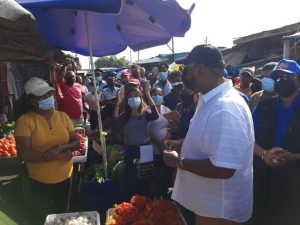 President Irfaan Ali on Sunday announced that the Parika Market would be expanded and a tarmac built after which no more roadside vending would be tolerated as part of a plan to bring order to that East Bank Essequibo thriving fruit and vegetable market.

“We are going to put the investment in, we are going to pout the infrastructure in but everybody got to get inline. That is the only was a society can advance when people become disciplined,” he told a vendor.

The President said notices would be issued to vendors next week.

After a walkabout to get a sense of the prices of agricultural produce and vendors’ concerns about the functioning of the market, he announced that the market would be extended to one of two nearby ballfields and a proper shed would be constructed to accommodate all vendors.

He warned vendors that after the market is rehabilitated, street-side vendors would be issued notices to occupy their stands inside the market or they would be repossessed. “If you have a stand there and you’re not occupying it, that will be taken back and given to people who need the stand,” he said. The President said once the infrastructural improvements to the market are completed, “then the people will have to move.”

Expecting roadside vendors to block the road to protest their removal, he appealed to vendors inside the market to be part of the decision-making process. “I am telling you right now that we are going to make that decision and everybody in the  market who got stand here and not occupying the stand from next week the notice will be issued to everybody,” he said. He said those selling  in front have to return to their stands “because they place has to be cleared.”

He said Minister of Commerce Oneidge Walrond and Minister of Public Works II Deodat Indar would be holding a two-week consultation with the vendors and then money would be allocated for the project that is expected to last less than six months.