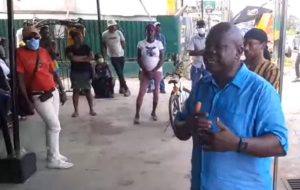 PNCR Leader Aubrey Norton addressing residents of Linden on the removal of the LUSCL Management Committee and replacement with an IMC.

The Guyana government Saturday night dismissed claims by the Leader of the People’s National Congress Reform (PNCR), Aubrey Norton that the appointment of an Interim Management Committee for the Linden Utility Services Cooperative Society Limited (LUSCL) was part of a plan to hike electricity rates.

“This is totally untrue as the government has no such plans. Guyanese should therefore not fall prey to Norton’s attempt to mislead and cause panic,” Vice President Bharrat Jagdeo in response to Mr. Norton’s claims during a meeting with residents of Linden and LUSCL officials.

During his meeting outside the LUSCL office on Friday, Mr. Norton accused the government of hatching a plan to remove the electricity subsidy for Linden through an IMC. “They are seeking to put a management that they control and then they will be able to orchestrate it in such a way that they remove the subsidy and automatically the cost of electricity will go up and so you must see this as the beginning or the continuation of the previous fight to ensure that they get rid of the subsidy and our own fight to ensure that the subsidy stays and we have to do everything to ensure that the subsidy stays,” said Mr. Norton who is expected to enter the National Assembly on Wednesday for another stint as a parliamentarian. Back in 2012, there had been controversy over whether APNU had agreed with the then People’s Progressive Party (PPP) administration for the phasing out of the subsidy and had backed out of the deal after Lindeners had staged protests which days later had resulted in the shooting death of three protesters. The Mackenzie-Linden Bridge, which had been blocked by protesters for days, is the main artery to several interior mining areas and communities in Region Eight and Region Nine. 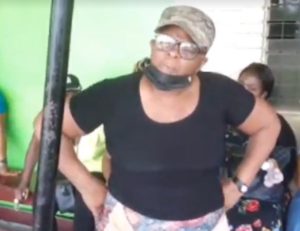 The former Secretary of the LUSCL.

Rather than the Chief Cooperative Development Officer’s (CCDO) appointment of an IMC, the PNCR Leader said an independent committee should have been appointed to investigate areas of alleged mismanagement and send the report to the LUSCL for comment and defence. He charged that the move was part of the Irfaan Ali-led administration’s plot to dominate and control Linden through a number of its friends in that region.
But Prime Minister Mark Phillips deemed the PNCR’s utterances as “lies being peddled” to Lindeners and said “the Government of Guyana has no plans to increase the electricity rates being paid by the people of Linden. He explained that LUSCL’s Management Committee was replaced by the CCDO because of “gross mismanagement.”  He said the IMC, who are made up of Linden residents of “good standing” who would take steps to fix that utility provider. “They are tasked within six months to bring some order and financial discipline to that Co-op Society,” he said.
Mr. Phillips, however, ruled out government taking over or controlling that electricity provider. “At no time is the government interested in taking control of the Linden Utility Services Cooperative Society Limited. At no time will the government direct the affairs of the Linden Utility Services Cooperative Society Limited and at no time did the government mention or pass any instructions to increase the electricity rates paid by the people of Linden,” he said.
LUSCL Secretary, who said “I am so annoyed” at suggestions that she was being called a fraudster, admitted that the utility had been having some problems that had been addressed. “We are aware where we fell down short and we were in the process of putting our books, our records in order to carry to the membership. In fact, we were already responding to the management letter that the external auditor sent us,” she said.
She said even with the allegations of mismanagement, electricity bills were not increased and salaries were being paid on time, higher priced transformers were being purchased and electricity was being supplied. “We have been doing tremendously for this organisation…,” she said.
The CCDO said it decided to appoint the seven-member IMC because  there was no Annual General Meeting (AGM) since 2014, despite the law requiring AGM to be held annually;  Conflict of interest whereby a sitting committee of members also acted as the Office Manager of the LUSC, and the the Membership Register  has not been updated since 2014 as a result of no new members having been approved by the management committee.