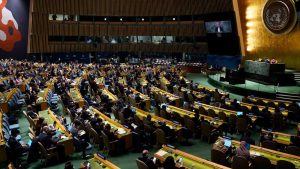 Insisting that Guyana does not support Russia’s invasion of Ukraine, President Irfaan Ali on Friday defended Guyana’s decision to abstain on a vote for the suspension of Moscow’s suspension from the United Nations Human Rights Council.

“Let me very clear about this, we are strongly in support of every action to bring this war to an an end and we are against the invasion of Ukraine and the military action,” he told Demerara Waves Online News.

Asked what were the factors that influenced Guyana’s abstention from the resolution, he said that Guyana had been sharing information with leaders of sister Caribbean Community (CARICOM) member states, and hinted that Georgetown’s position was due to a probe into alleged human rights violations. “The UN has launched the process of doing the investigation to come up with the factual basis of what is happening in terms of human rights violations and what we have said is that once that report comes out- the UN Report – then the findings of that report must be respected or supported,” he said.

Told that half of the independent CARICOM nations had voted in favour of Russia’s suspension from the UN Human Rights Council, Dr. Ali said that in the past “we have voted yes when some of CARICOM have voted no” in the past on many matters related to Russia.

The other independent member states of the bloc that opted to abstain were Barbados, Belize, St Kitts and Nevis, St Vincent and the Grenadines, Suriname, and Trinidad and Tobago.

The UN reported that 93 voted in favour, 58 abstained and 24 against.

Russia has since announced that it had planned to exit that Council even before Thursday’s vote.

Prior to the vote, Ukrainian Ambassador Sergiy Kyslytsya urged countries to support the resolution.

“Bucha and dozens of other Ukrainian cities and villages, where thousands of peaceful residents have been killed, tortured, raped, abducted and robbed by the Russian Army, serve as an example of how dramatically far the Russian Federation has gone from its initial declarations in the human rights domain. That is why this case is unique and today’s response is obvious and self-explanatory,” he said.