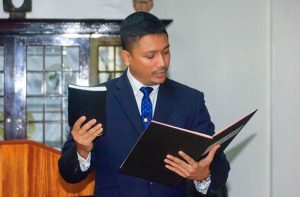 The High Court on Wednesday afternoon ruled that now former Chairman of the Police Service Commission Paul Slowe can challenge the suspension of himself and the other then commissioners by President Irfaan Ali.

But Attorney General Anil Nandlall hours later filed a notice of appeal saying that the Judge’s decision  is “unlawful, unconstitutional, and is not supported by established legal principles and doctrines” and that it potentially permits Paul  Slowe, a citizen, to usurp, interfere with, compromise, undermine, and assume the functions of the PSC in breach of Guyana’s Constitution.

Delivering the judgement, Justice Gino Persaud reasoned that a hearing and determination would clarify the role of the Executive in such instances and ensure that the constitutionally granted autonomy of the PSC remains protected.

Mr. Persaud also found that Mr. Slowe has a sufficient interest because he is “directly affected” together with the locus standii to continue the proceedings on behalf of all of the Commissioners. The Judge said the court was exercising its inherent jurisdiction ordered that Mr. Slowe be substituted as the applicant in the place and stead of the PSC so that the matter could be adjudicated.

The High Court ruled that the Attorney General should file an affidavit in defence by April 6, 2022 and Mr. Slowe could reply if necessary by April 2o, 2022 after which the two sides must simultaneously file written submissions by May 4, 2022 after which a date would be fixed for an oral hearing.

But already Attorney General Nandlall has filed an appeal to the Full Court on the grounds that Justice Persaud has misinterpreted, misconstrued, and misapplied the important doctrine of ‘public interest litigation’ in such a manner that the decision of the Learned Hearing Judge has resulted in a grave miscarriage of justice; erred and misdirected himself in law by ruling that Mr. Slowe be substituted instead and in place of the PSC; the decision is misconceived, and erroneous in law; violates the doctrine of  separation of powers; violates Guyana’s constitution; undermines the constitutionally guaranteed independence and functional autonomy of the PSC.

Justice Persaud said neither the Attorney General’s legal team nor that of Mr. Slowe had found any precedent but he relied on cases in Trinidad and Tobago and the United Kingdom that state that the public law principle points to decision rather than the parties. “I find that the issues raised in this case are matters of public interest. In light of the public interest and the authorities review which establish that in judicial review proceedings, there is no lis between the parties and the fact that judicial review proceedings are directed at the decision and not the parties, I am of the considered view that the substantive view of the legality of the suspension of the Commissioners should be heard and determined on its merits being a matter of public interest,” he said. The Judge said the Court could not afford to leave the legality of the suspension hanging because the life of the Commission came to an end after filing the proceedings. “This, to me, does not seem either logical or fair but rather an affront to fairness, natural justice, access to justice and indeed the rule of law,” Justice Persaud added.

Pointing out that his decision on Wednesday was not about the main case that challenges the merits of the suspension of the PSC members. he noted that the suspended Commissioners had not been properly advised to institute the proceedings and that ought to have been done in their individual capacity because they had been suspended and the end of their term had been imminent on August 8, 2021.

Attorney General Anil Nandlall had sought to convince the court  that the Fixed Date Application concerning the suspension of the PSC commissioners ought to have been struck out because the PSC  had become lawfully vacant and could not maintain legal proceedings.

Even after the government had announced the PSC’s suspension, Mr. Slowe had gone ahead and announced the promotion of several police officers including those that apparently had not found favour with the government. On the other hand, the PSC had refused to promote several others on the grounds that they had had pending disciplinary matters.