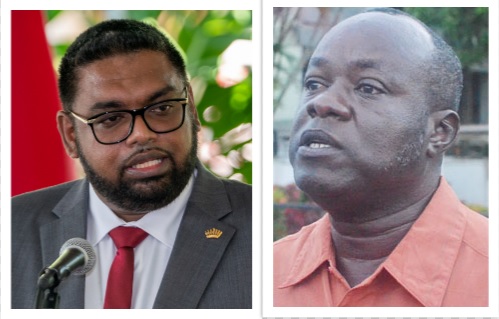 President Irfaan Ali on Sunday appeared to hinge any  chance of power sharing  to the opposition agreeing to free and fair elections, just days after People’s National Congress Reform (PNCR) Leader Aubrey Norton pegged it to a clean voters list.

Against the background of  a United States Agency for International Development (USAID)-funded report recommending that Guyana should move towards power-sharing in order to manage the country’s oil wealth efficiently, the Guyanese leader highlighted that the international community had also cited the need for democracy. “The same , entire international community spoke about the attempts to rig an election, spoke about the attempt to steal democracy from the people of this country. Let’s fix that first,” he told a news conference.

Dr. Ali said urged Guyanese to banish the “monsters”, in clear reference to the PNCR-led coalition of A Partnership for National Unity+Alliance For Change (APNU+AFC) that continues to counter-accuse his People’s Progressive Party Civic (PPPC) of rigging the March 2020 general and regional elections. There are two pending election petitions. “Let us rid ourselves of these monsters in society who would want to take our democracy, the rule of law and rig elections. The days for those are gone and we must fix that; let’s start from there, let’s start fixing there,” he said.

Mr. Norton last week reiterated his party’s support for inclusive governance and some form of power sharing that would have to be negotiated. He said due to Guyana’s problems, “no one party will be able to solve them.” He said a demand the involvement of political parties and all stakeholders but only after an acceptable voters roll is produced. “I do not see us getting into any serious dialogue if we cannot agree on a new voters list, a clean voters list. The basis for democratic elections is a clean voters list and so even if you are going to share government after, if you don’t have a clean list and an election that is considered credible then you would still have problems,” he said.  The international community, including Western Nations, Caribbean and extra-regional Observer Missions, had cited manipulation of results for Region Four in favour of APNU+AFC.  Several now former GECOM and PNCR officials are before the court on charges of electoral fraud.

The PNCR Leader said his party welcomed the views in the USAID report.

“The ruling party, the People’s Progressive Party (PPP) and the opposition coalition the A Partnership for National Unity and Alliance for Change (APNU+AFC) need to find a way to form a functioning democracy based on power-sharing rather than a “winner takes all” mentality. This would ensure that the unprecedented wealth in oil reserves can be transparently and equitably managed for the benefit of all Guyanese,” the report states.

The Democracy and Governance Assessment held out little hope for the National Assembly to be platform for power sharing because it was “combative at best”.