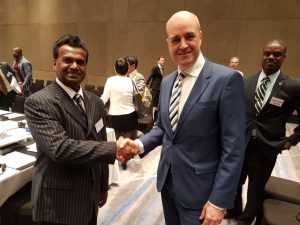 Article 13- a Guyanese, the  pro-inclusionary democracy organisation, on Sunday took the Guyana government to task for removing Dr Rudy Jadoopat as the Coordinator  of the Guyana Extractive Industries Transparency Initiative (GYEITI) on the fake grounds that he is a member of the Alliance For Change (AFC).

The non-governmental organisation indicated that it was perplexed at the Ministry Natural Resources citing Dr. Jadoopat’s perceived political association as a reason for removing him from the post.  “Article 13 is deeply concerned  that the Government gives itself the right to terminate the contract of employment of persons  who have any association, perceived or real, with an opposition political party. The resonance  with the days of the Party Card is frightening and completely unacceptable,” Article 13 states.

The Ministry of Natural Resources  had said that “the position had been granted to Dr. Jadoopat, an active member of the AFC New York chapter, due to his political affiliation”, a charge that that opposition coalition partner has since rejected. “The Alliance for Change (AFC) refutes outrightly, the false assertion that Dr.  Rudy Jadoopat was a member of the AFC.  Perusals of the AFC’s records, both local and overseas, show that Dr. Jadoopat was never a member of the party in Guyana or in the North American Chapter,” that party had said.

While the AFC and Mr. Jadoopat had denied that he is a member of that party, Article 13 has called on civil society organisations to pull out of the GYEITI Multi-Stakeholder Group because the new coordinator is a known People’s Progressive Party (PPP) advocate.  “Article 13 calls on the Civil Society representatives of the Multi-Stakeholder Group which oversees  the work of the EITI secretariat, to reconsider their participation in the MSG as offering legitimacy  to a compromised organisation,” Article 13 said in a statement.

Similarly, the AFC said urged the the MSG members and EITI International “to condemn this political interference by the Government and see this replacement as a dilution of the independence of GYEITI.”

Article 13 suggested that the Ministry of Natural Resources has conveniently ignored Dr. Misir’s long association with the PPP. He had served as Chairman of the Board of the now defunct Guyana Broadcasting Corporation, former Pro-Chancellor of the University of Guyana and former Executive Director of the then Government Information Agency  at the time the then PPP administration had banned government ads from the privately-owned independent Stabroek News newspaper.

“The Ministry, it seems, does not see the irony in offering Dr. Jadoopat’s association with an  opposition political party as a reason for the termination of his employment while endorsing the  recruitment of Dr. Misir, a long-time supporter of the ruling Party,” Article 13 added.

Article 13 said it feared that by replacing Dr. Jadoopat with Dr. Misir,  “the integrity of the work of GYEITI will be compromised and that Guyana and its people will be  the loser internationally, among international investors and multilateral institutions.” “While Article 13 agrees that all contracts of employment must follow processes,  there is nothing in the public domain to suggest that Dr. Jadoopat has not delivered under his  contract. In fact, the opposite seems to be the case,” it added.

The AFC, for its part, described Dr. Misir as a “known PPP  activist” “who has no previous knowledge or background in anti- corruption and transparency initiatives.

EITI js a global accountability organisation for the natural resources sector to track investment, production, sale of of and use of proceeds.

Guyana has been an EITI Implementing country in October 2017 and its Guyana’s Validation  under the EITI Standard commenced on 1 October 2021.