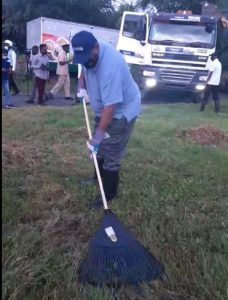 President Irfaan Ali on Saturday announced that police would be deployed and cameras installed to catch persons who dump garbage on parapets, as part of a crackdown on litterbugs.

“We are going to put police presence at these sites where people continuously dump  their garbage  and who are worse than the garbage itself because they have no regard for the environment,” he said. “While the police will be out here, the government will be working on cameras to be installed at specific locations because some of it is deliberate in action also so we will be working on cameras to get these persons who continue to deface our country,” he added.

He made the announcement on Hadfield Street, Georgetown as he and several ministers prepared to join a massive City clean-up involving the private sector, Joint Services and other stakeholders. Thirteen of the 25 locations across the capital are being targeted on Saturday and the remainder on Sunday.

The President also restated that a number of beautification and enhancement projects are in the pipeline including the construction of walkways and the transformation of the old Georgetown train station  into an art gallery. He said government’s overall aim was to make Georgetown a “safe zone” to  build relationships among families and communities such as the Christmas Village on Main Street

Meanwhile, City Mayor Ubraj Narine, who shared a news conference with the Leader of the People’s National Congress Reform, Aubrey Norton, announced that elected A Partnership for National Unity+Alliance For Change (APNU+AFC) councillors in Georgetown and other councils would not be participating in any of the clean-up operations because the government has been starving the City of resources. “To register the Party’s rejection of the PSC/GoG exercise, we are calling on all APNU-led local councils in towns and villages to withhold their support. To do otherwise would be to encourage the PPP to further disrespect and undermine their authority and mandates,” he said on Friday. He also expressed concern about the use of the Joint Services in the clean-up operations.

The Mayor recently said that he has asked the Local Government Minister to approve fines and a licensing system to combat littering in Georgetown and get businesses to comply with rules for garbage collection and disposal.

Local Government Minister Nigel Dharamlall has declined to respond to whether he would give the green light for the fines so that the City could charge and prosecute persons who dispose of waste in an indiscriminate manner.

The Mayor has also publicly complained that the City administration does not have sufficient manpower and vehicles to go after litterbugs. At the same time, he has also stated that City Hall would not use its scarce resources to enforce the Environmental Protection Act because the municipality will get no revenue from doing so.