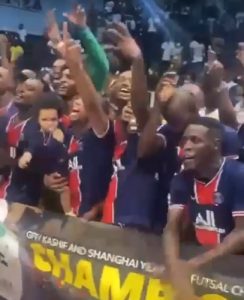 Unmasked footballers and spectators at the National Sports Hall.

The People’s National Congress Reform (PNCR) on Sunday condemned the Guyana government’s approval of events with large gatherings, although thousands of Guyanese are being infected with the coronavirus.

The Prime Minister, Mark Phillips, who chairs the National COVID Task Force, when contacted, said “we will investigate and issue a press statement later.”

The PNC accused the government of giving the green-light for mass gathering events or ignoring them.

The PNC suggested that Kashif and Shanghai, which organised the Futsal game at the National Sports Hall , is politically favored by the People’s Progressive Party administration.

According to the PNCR, that super spreader event saw the attendance of hundreds if not thousands of Guyanese in and around the venue congregating clearly without observing the Covid-19 protocols, specifically the wearing of face masks and social distancing

The opposition party also assailed the National Sports Commission, the Director of Sport,  the Guyana Football Federation (GFF), the Ministry of Health and the National Covid-19 Task force for allowing the  GFF/K&S year-end Futsal Competition. Against that background, the PNCR claimed that other groups were being discriminated against.

“What is most concerning and very worrying is that while other groups are refused permission to hold similar events, the PPP/C is willing to risk the lives of Guyanese to permit a group that supports its political agenda to host a super spreader event amidst the Covid-19 pandemic,” that party said.

According to the PNCR no group should be given permission at this time.

Recently, there was a large Kooler Fete party in Linden, raising grave concerns about the failure of the COVID-19 Task Force.

The Guyana government had also relaxed the curfew hours for Old Year-New Year , and had hosted a concert and Christmas Village on Main Street during the festive season.

Latest official figures show that there now 5,248 active cases of whom 96 are hospitalised and 5,152 have been told to isolate themselves at home. The Health Ministry also said that the latest daily number of new cases is 1,016. Four persons are receiving intensive care, and so far there are 1,067 deaths since the pandemic struck Guyana in 2020.