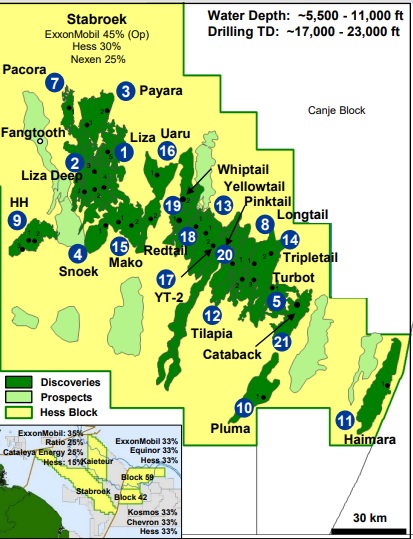 Oil discoveries so far in the Stabroek Block (Picture from Hess)

Four civil society organisations, People’s National Congress Reform (PNCR) and A New and United Guyana (ANUG) are worried that the Irfaan Ali-led administration is setting the stage to waste Guyana’s oil revenues under the guise of emergency use.

The Guyana Trades Union Congress (GTUC), the pro-inclusionary democracy non-government organisation Article 13, and Transparency Institute of Guyana Inc (TIGI) said the Natural Resource Fund Bill would allow the government to withdraw US$1,250 million of the first US$2 billion but that would not include withdrawals for emergency financing.

Referring to the constant resort to the Contingency Fund, those organisations concerned that the Bill, which would be debated in the National Assembly, would  create the condition for the government to spend the oil revenues unscrupulously under the guise of emergency.

“If the constant resort to the Contingency Fund is any guide, emergency financing will take up what is left after these set withdrawals,” the NGOs said in a joint statement.

Separately, the African Cultural and Development Association (ACDA) condemned government’s “haste” to remove safeguards from the Natural Resource Fund legislation called for this move to be halted. “These safeguards have been put in place to ensure that the revenues from Guyana’s oil resources are managed transparently and with input from Civil Society. The proposed changes are a most egregious act against all the people of Guyana and their generations to come,” ACDA said.

ACDA said Guyana’s oil wealth belongs to all Guyanese and any change to the existing Natural Resource Bill “must be fully ventilated in the public domain with public consultations across Guyana seeking the input of all Guyanese thereafter a referendum should be held.” “The wealth to be generated by our oil resource is too important to be decided by a few persons with no consultations from the Guyanese people. The future of our country and the wealth of our future generations are at stake,” that organisation said.

ACDA further proposed that a reconciliatory approach to resolving this serious national issue be instituted as failure to do so would lead to worsening the political/racial divide in the country. “It is our conviction that a responsible government will step back and seek a compromise in the interest of the nation and all Guyanese,” ACDA said.

Meanwhile, 62 persons have signed a petition asking the National Assembly to pause debate on the Bill “until proposed amendments can be considered by non-parliamentary citizens.” Vice President Bharrat Jagdeo has said that unlike trade unions and the private sector, as well as the government with an elected mandate from Guyanese, do not have any constituency but they are heard internationally.

PNCR Leader Aubrey Norton highlighted that the government has scrapped provision for the Fiscally Sustainable Amount and has included an arbitrary withdrawal ceiling, which includes a sliding scale ranging from 100% of fund withdraws to 3% of fund withdrawals. He said for example, if US$2.5 Billion came into the fund within the previous year, this government can withdraw as much as US$1.5 billion or as much as 60% of the amount that came into The Fund for its own spending purposes. He also echoed fears of squander mania under the cover of emergency financing. “Keep in mind this amount does not include any emergency spending for events such as a natural disaster. This arbitrary approach to withdrawing the Guyanese people monies will ensure that nothing is left over for our children and our grandchildren,” he said.

A New and United Guyana (ANUG) political party said the government was setting the stage to pillage the Natural Resource Fund.  “Most recently, the  Government has indicated it’s intention to use its majority in Parliament to amend the Petroleum legislation by removing any meaningful safeguard against its unrestricted access to the Oil Fund. The spending spree will now ramp up,” ANUG said. That party flayed the PPP administration for bending the rules to facilitate easy access to State resources for its supporters. “A New and United Guyana has observed the policy of governance by the People’s Progressive Party since their return to power, and regrets to note an alarming trend to dispense with necessary systemic safeguards, to marginalize the citizens of Guyana who are not perceived to number among the party faithful, and to favour those citizens of Guyana who are perceived to be supporters, while shaping statutory institutions and systems to facilitate easy access to State resources to pursue this divisive agenda,” he said.

Under the existing Natural Resource Fund Act that would be repealed because it was passed by the National Assembly after the passage of the no-confidence motion,  the Fiscally Sustainable Amount is the maximum amount that can be withdrawn from the Fund in a fiscal year while ensuring the long-term  financial sustainability of the Fund, a fair inter-generational distribution of natural resource wealth and maintaining stability in the
annual withdrawals from the Fund.

The PNCR Leader restated his concern that the PPP has whittled away oversight by placing virtually every aspect of the management of  the Fund back in the hands of a ministerial directed Board.  The Bill provides for an Investment Committee which shall advise the Board of Directors on the Investment Mandate. The Investment Committee will include a representative of the opposition.

President Irfaan Ali on Tuesday sought to assure critics of the new Natural Resource Fund Bill that monies spent from the Fund will be scrutinised through parliamentary debate on the budget, the Auditor General’s Report and the Public Accounts Committee.

But Mr. Norton said such mechanisms were nothing new, but government was about to scale back the Public Accountability and Oversight Committee, an independent committee that represents a broad-based section of Guyanese society,  which is require to provide public consultation on the overall management of The Fund. (Section 6 of The Act).

“The President failed to disclose that his government wants to wrestle away oversight authority from this independent committee and place it in the hands of the same Board of Directors who is also responsible for the management of The Fund.  How can a board provide oversight and hold itself accountable?,” he said.

Elsewhere, the PNCR Leader is on record as saying that the government would pass the Natural Resource Fund Bill but he would depend on domestic and international pressure for changes to be eventually made.