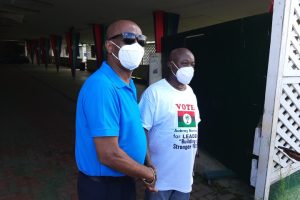 Guyana’s Opposition Leader, Mr. Joseph Harmon on Tuesday sought to justify why he should remain in that post, saying that represents a larger block of more than 200,000 Guyanese voters instead of just over 1,000 delegates who voted at the party’s recent internal elections.

When asked if there was a chance of him stepping down from the post of Opposition Leader Mr. Harmon said, “not as I see it” but he said if a majority of the PNCR’s executive votes that he should be replaced, he would step aside. “If in fact my situation, my sitting there makes it difficult for the members of parliament to be able to challenge the PPP (People’s Progressive Party) and to confront them at every level, then certainly I would consider it so it is a matter, though, if our strength in the National Assembly, our ability to confront the PPP and the parliamentary agenda,” he said.

Mr. Harmon does not see his reluctance to step aside as Opposition Leader leading to a schism in the PNC, suggesting that he has wider national support. “I believe that the people of the party, the delegates have spoken, with respect  to the leadership in the PNC and the people of the country have spoken with respect to my leadership of the National Assembly and the opposition in the National Assembly,” he said

Asked how he intended to represent the positions of his party, the largest in the coalition of A Partnership for National Unity+Alliance For Change (APNU+AFC) in the National Assembly, given the fact that he is no longer a member of the PNCR’s Central Executive Committee, Mr. Harmon said he would be relying on the Chief Whip, Christopher Jones and other parliamentarians who are on the Central Executive. “I do not see a problem with the information which comes from the party that would inform the decisions which are made at the level of the Parliament,” he said.

Alternatively, he indicated that he could be coopted on the PNCR’s Executive. Although Mr. David Granger had campaigned in 2020 as APNU+AFC’s presidential candidate, he had opted not to return to the National Assembly as Opposition Leader and Mr. Harmon had been coopted on the PNCR’s executive and by a majority vote among opposition APNU+AFC parliamentarians to be the Opposition Leader.

Meanwhile, PNCR Leader Aubrey Norton said he believed that many Guyanese would like to see him become a parliamentarian. “I prefer to see myself at a place where the Guyanese people want me to be,” he said, adding that “in large regard, yes, but you know you could end up in the National Assembly without it being teemed with conflict.”

The Opposition Leader also made it clear that he is against recalling APNU+AFC parliamentarians “willy-nilly” and he was satisfied with their performance. “I will only support a recall on the basis of their performance of the MPs in parliament. Right now, I think that the MPs are doing a great job. I think that they have performed well and they continue to perform well and they have my support.

This is in stark contrast to indications given earlier this month by the PNCR Leader who said the feeling is that a number of a parliamentarians should be replaced. “I could say to you, however, that one thing that is evident is that the party comrades who would have elected me seem to have suggested by the mandate that there is need for change at the parliamentary level,” he said.