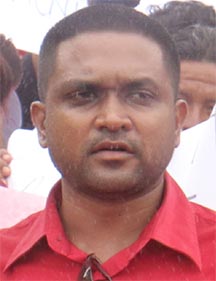 Minister of Local Government, Nigel Dharamlall’s public call for the removal of two Court of  Appeal judges after they ruled against his People’s Progressive Party in an election petition case was Tuesday night sharply condemned by opposition parliamentarian Annette Ferguson and other supporters of the People’s National Congress Reform (PNCR).

Shortly after the majority 2-1 decision by Justice Dawn Gregory and Chancellor of the Judiciary, Yonette Cummings that the Guyana Court of Appeal has a right to hear an appeal of the High Court’s decision to throw out an election petition, Mr. Dharamlall called for their removal on his Facebook profile.

“Same two judges who ruled that 33 is not the majority of 65. Their bias is obvious. They should be defrocked,” he said. The Chancellor and Justice of Appeal Gregory had ruled that the December 2018 no-confidence motion against the PNCR-led coalition of A Partnership for National Unity+Alliance For Change (APNU+AFC) administration had been invalid because 34 rather than 33 votes had been required to bring down the government and call fresh elections. The 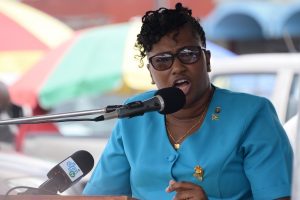 Caribbean Court of Justice (CCJ), Guyana’s final appellate court, had ruled that it was 33.

Attorney General Anil Nandlall also did not hide his displeasure and disappointment by the ruling, linking it specifically to the two judges. “I  think our jurisprudence is regressing. It’s unfortunate that the particular composition of the court continues to rule in a particular manner; that is not healthy for our society but that is what we have to deal with,” he said.

Ms. Ferguson lashed back at Mr. Dharamlall for disrespecting the separation of powers between the executive and judiciary.  “I condemn Mr. Dharamlall’s vile attack on the Justices and therefore call on Mr. Dharamlall to publicly offer an apology to both Justices Cummings and Barnes (Gregory),” said Ms. Ferguson who was at the weekend elected to serve on the 15-member PNCR Central Executive Committee.

Stating that Mr. Dharamlall  was  “disrespectful and out of order”, she said that Justices of Appeal Cummings and Gregory would not buckle under pressure. “He should also be reminded that the Justices are professional and law abiding Officers of the Judiciary and should not be subjected to Political Pressure and ridicule,” Ms. Ferguson said.

The Chancellor stayed her decision for case management to hear whether Chief Justice Roxane George-Wiltshire erred in dismissing the petition because APNU+AFC Representative of the List, David Granger had not signed the correct date on court documents that had been submitted to the High Court.

Justice Cummings issued the two-week stay to allow for lawyers for the People’s Progressive Party’s (PPP) Representative of the List of Candidates, Bharrat Jagdeo to study Tuesday’s decision before possibly filing an appeal to the Caribbean Court of Justice (CCJ). Mr. Nandlall has since said the decision would be appealed. 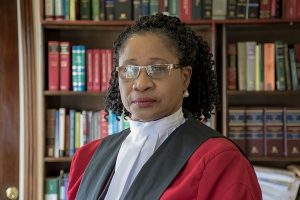 Then PNCR Leader, David Granger had cited the need for the law to be amended to block election cases from being taken to the CCJ which had not ruled in his coalition’s favour on a number of occasions.

Neither the PNCR nor the AFC  had said anything on the issue up to late Tuesday night. 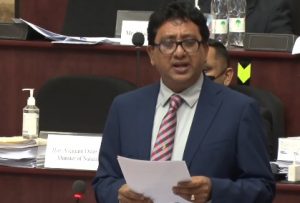 The Attorney General told a PPP Social Media appearance that Justices Gregory and Cummings “erred and we’re convinced that the Guyana Court of Appeal has no jurisdiction to hear or determine the appeal that is before it.” Mr. Nandlall did not call for their removal but noted that “those are the same two judges who have ruled in this way today.”

He further observed that a series of election-related cases had caused “many things” to become clear and had led the public to conclude that the principles related to election laws were “peculiar” and “special”.  “That is what is shocking about this Court’s ruling today because the Court, the two  judges, who ruled in the way that they did resorted to ordinary principles of law and they eked out a jurisdiction that in my humble and respectful view election jurisprudence says does not exist,” he said. He said the judges “violated those fundamental tenets and canons” although the Constitution and the law did not give the Guyana Court of Appeal jurisdiction. 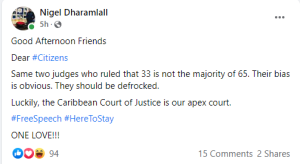 Unlike Mr. Dharamlall, Mr. Nandlall said no one enjoys the luxury of suggesting that the judges acted improperly. “The judiciary is not immune from criticism without fear of being cited for contempt. The judiciary is to suffer the scrutiny of the ordinary man and sometimes outspoken criticism of the ordinary man. However, one can’t attribute an improper or an illicit motive to the judiciary for a particular decision,” said the Attorney General. He cautioned against scandalising the court or disrespecting he judges.

A Judicial Service Commission (JSC)  is yet to be appointed by President Irfaan Ali  to allow for the appointment of judges. The Chief Justice and the Chancellor of the Judiciary have been acting for several years now under both the PPP and APNU+AFC administrations.