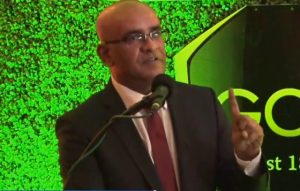 Guyana has given ExxonMobil permission to examine the possibility of capturing carbon that is responsible for climate change, Vice President Bharrat Jagdeo announced Thursday night.

Addressing the Georgetown Chamber of Commerce and Industry’s (GCCI) 2021 awards dinner, he said, “carbon capture- Exxon has sought permission and we have given that permission to do a study on carbon capture.”

He did not provide details in his more than 40-minute address to the event that was held at the Pegasus Hotel.

Earlier, in his address, President of ExxonMobil Guyana, Alistair Routledge highlighted his company’s strategy in the area of carbon capture but made no specific reference to the approval that has been granted to Guyana. “On a corporate level, ExxonMobil announced our Low Carbon Solutions business to commercialize our extensive low-carbon technology portfolio, which is initially focused on Carbon Capture and Storage, advancing plans for multiple new opportunities around the world to enable large-scale greenhouse gas emission reductions,” he said.

ExxonMobil had earlier this year come in for sharp criticism by the Guyana government  and environmental activists for gushing large quantities of natural gas into the atmosphere due to repeated faults in its equipment aboard the Floating Production, Storage and Offloading vessel.