PNCR needs to unite, not bicker after every internal election- Figueira 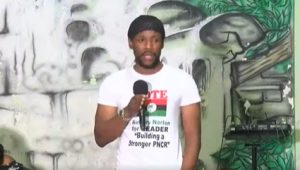 Region 10 (Upper Demerara-Upper Berbice) parliamentarian for the People’s National Congress Reform (PNCR), Jermaine Figueira has said the time has come for his comrades to cease bickering after every congress and instead unite.

“The party has a bad history of factionalism after congresses be it regional or national and it doesn’t augur well for the holistic progression of the party and we need an individual who understands the culture of this party,” he said.

He reasoned that party unity is key to winning the next general elections. “If we are to regain political power it requires all comrades, all leaders, all candidates who are vying for leadership position to accept the position that after congress the PNC family is most important and they have to come together,” he added.

Mr. Figueira expressed confidence that Mr. Norton would unite their more than  60-year old political movement whose contenders, the parliamentarian acknowledged, have qualities that could collectively make the PNCR a “formidable” force.

The PNCR’s long-awaited congress is due to be held on December 11, 2021 when Norton, Joseph Harmon, Richard Vanwest Charles and Basil Williams hope to secure the majority of votes to lead their party into the next general elections.,

In stoutly endorsing party executive member, Aubrey Norton,  for the position of leader at the PNCR’s internal elections scheduled for December 11, he said that political organisation was “at a crossroad where members have to make an intelligent decision.”

Mr. Figueira, who claims to have the support of at least 500 members in Region 10 and has organised thousands others , said he opted just to make himself available to be elected to the 15-member executive rather than any of the other top party posts.

Meanwhile, PNCR Executive Member Christopher Jones highlighted the importance of the upcoming congress, saying that it would be the launchpad for the next general elections campaign. “Comrades, these elections for  the PNC are essentially the start of the party’s election campaign and every person elected at this Congress is essentially setting that strategic group of individuals who will hit the ground running to get the work done that is necessary,” said Mr. Jones who is also the Opposition Chief Whip.

Eyeing the position of Vice Chairman, he promised to work with the Central Executive Committee to form groups of the youth arm, the Guyana Youth and Student Movement, countrywide. He promised that if elected Vice Chairman the GYSM would hold its Biennial Congress and “you would have members from all parts of this country.”