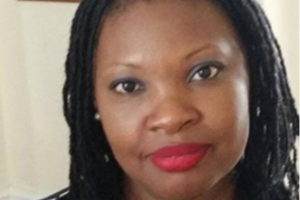 “I’m very happy that the Warrau people are receiving the support that they need,” said Head of Blossom, Ayodele Dalgety-Dean.

She said Blossom “works ethically” and the the national systems were informed on Thursday. The Guyana government on Saturday rushed more food supplies to Anabisi and other areas as well as deployed a high-level ministerial team who included Drs. Frank Anthony and Vindhya Persaud. Other doctors from the Georgetown Public Hospital were also part of the team. 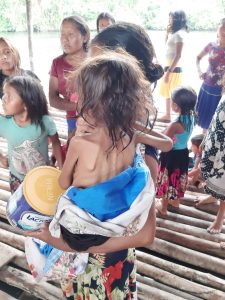 Ms. Dalgety-Dean pledged that her organisation would continue to engage with the Guyana government in the interest of Guyanese who are in dire need. “Blossom will continue to work collaboratively with the govt to support vulnerable children and families in Guyana,” she said.

The Guyana government has conceded that the Warraus at Anabisi were in “poor health and without food”, but the Minister of Human Services Dr. Vindhya Persaud has rejected reports that they were facing starvation and dying.

Blossom has reported that one child has so far died and another critically ill child has been transported to the Georgetown Public Hospital.

Health Minister Dr. Frank Anthony was quoted by government’s Department of Public Information that four children and their mother were taken to the Port Kaituma Hospital. They were reportedly suffering from skin rash, diarrheal diseases and conjunctivitis (pink eye). 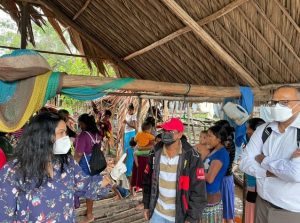 Ms. Dalgety-Dean is a trained Family Therapist who has completed post-graduate work in Systemic Practice with Children and Families.

Government was scheduled to dispatch another medical team to the area on Sunday.

Prime Minister Mark Phillips said that government has been providing food and other supplies as well as other forms of support to migrant Venezuelans.

They have been fleeing the harsh socio-economic and political conditions in their homeland, partly due to a prolonged slump in global oil prices, a gripping foreign exchange shortage and international sanctions over widespread suspicions of electoral malpractice.