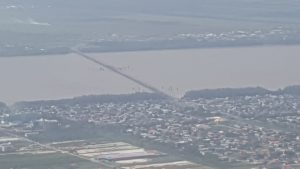 China State Construction Engineering Corporation (CSCEC) has been approved to build the new Demerara Harbour Bridge at a cost of US$256, 638,289, paving the way for further negotiations with the company, according to well-placed sources.

The disclosure by the confidential sources close the project said that now that the National Procurement and Tender Administration Board (NPTAB) has evaluated the bid from among the four as the most responsive, the way is now clear for  negotiations between the company and the government.

The source explained that under the deal, CSCE would finance, design and build the four-lane high-span east-west thoroughfare across the Demerara Bridge. The

A top government official said under this model, the fares to cross the Demerara River would not increase dramatically because government would be operating the bridge.

“The new bridge will offer easy connectivity to both the existing East Bank Demerara road as well as the new Diamond to Ogle bypass on the eastern side of the River and to the existing West Bank Demerara Road and the new Parika to Schoonord Road on the western side of the River. The new bridge will also offer critical connectivity to the new Wales Development Authority which will be a major centre of productive activity when it comes on stream,” the government said.

The company would be required to construct a hybrid Cable-Stayed center span bridge with Concrete Box/T Beam Girder approach bridge structure along with bridge collision protection, navigation span to accommodate Handymax vessel Navigation aids, lighting, signage, and all other ancillary works, an access road with a minimum of 50 meters up to abutments, and toll collection buildings and ancillary buildings on the West Bank of the Demerara River.