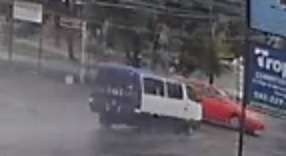 The Guyana Police Force “mistakenly” stated that well-known Guyanese aviator, Michael Chan-a-Sue did not stop at a major road when a speeding minibus slammed into him, causing him and his wife to sustain serious injuries, a colleague said Sunday.

Relying on a surveillance video that covers the area including High and Barrack Streets where the accident occurred Saturday afternoon, Mr. Kit Nascimento refuted the police account that Mr. Chan-a-Sue did not stop.

“It was mistakenly reported that Chan-a-Sue did not stop. The bus was obviously moving at a huge speed and was out of sight,” said Mr. Nascimento who is a professional colleague and friend of the veteran aviator. Mr. Nascimento believed that at the time of the police media release, investigators “did not have the benefit of the video.”

Based on the video released by Mr. Nascimento, Mr. Chan-a-Sue stopped for about one second on Barrack Street before proceeding further west across High Street and into the path of the minibus. But Mr. Nascimento reiterated that, “the video speaks for itself. He stopped. The bus was traveling at well over the speed level.”

Police on Saturday stated that, “as the said motorcar approached the intersection of High and Barrack Streets where a traffic sign marked STOP and a stop line are lawfully placed regulating the movements of traffic, the driver failed to stop and continued further east across the said intersection in front of minibus #BSS 8899 which was proceeding north along the western drive lane of High Street.” Mr. Chan-a-Sue and his wife, Margaret, were seriously injured and were rushed to the Intensive Care Unit of the Georgetown Public Hospital Corporation.