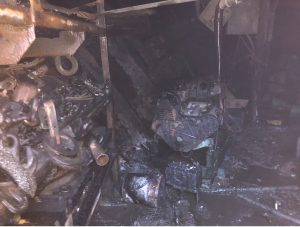 The burnt engine of the MV Sydney Marie

The engine of a cargo ship, owned by a Vincentian company, was early Tuesday morning badly damaged by fire while it was moored at wharf in Guyana, the local fire service said.

“The cause of the fire was determined as overheating of a generator in the fore peak of the ship which resulted in arcing and sparking. The generator was severely damaged and a quantity of rope was destroyed as a result of the fire,” the fire service said.

Authorities said no one was injured and firefighters contained the blaze to the generator room and so averted the destruction of the vessel. 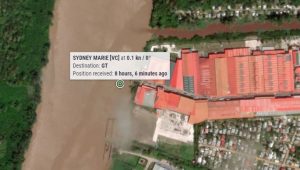 The location of the MV Sydney Marie at Land of Canaan, East Bank Demerara.

The Guyana Fire Service said it received a call at 3:31 Tuesday morning and was alerted of a vessel on fire at Gafoor’s Complex, Land of Canaan, East Bank Demerara.

Aside from fire-fighting equipment and personnel being trained in its use, these are some of the basic rules sea-farers can follow to prevent accidental fires on ships: