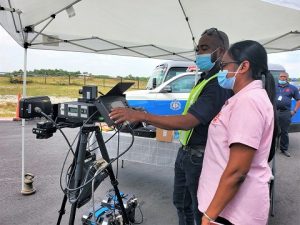 Executive Director (ag) of the GNBS, Ms. Ramrattie Karan (right) looks on as Inspector of the GNBS’ Legal Metrology Department Keemo Fyffe explains the functions of the MultaRadar Equipment and Compact Device.

The Guyana National Bureau of Standards (GNBS) on Wednesday began verifying speed guns submitted by the Guyana Police Force to ensure that they are delivering accurate readings, the regulatory and testing agency said.

The Bureau, as the National Measurement Institute, said it was using its newly acquired MultaRadar Equipment and Compact Device to test the speed guns.

During a press conference held at the South Dakota Circuit to launch the service, Executive Director  of the GNBS, Ms. Ramrattie Karan pointed out that accuracy is key when using a measuring instrument. She noted that the acquisition of the equipment followed several complaints that the speed guns used by Police Officers on the roadways, may not be delivering accurate readings.

“The GNBS, with support from the Government of Guyana, will continue to identify areas for collaboration, and support stakeholders providing key measurement services to Guyanese,” she said.

The launch followed a two-day training on the Commissioning & Use of the MultaRadar Equipment and Compact Device for Inspectors of the GNBS and Ranks of the Guyana Police Force, who will be the direct, if not the sole beneficiary of this service.

The training was conducted by Solutions Architect Manager Mr. Corlan McDonald of JENOPTIK. He noted that the training included not only “a hands-on” approach to using the verification equipment but also its setting up, installation and configuration. Mr. McDonald further stated that the device is used across the world in various conditions.

On Wednesday, the new verification equipment was also tested at the South Dakota Circuit to verify one of the speed guns used by the GPF.

Traffic Chief, Senior Superintendent Ramesh Ashram welcomed the new service. He said the GPF is looking forward to working with the Bureau of Standards as it relates to further calibration of its current speed guns, new guns that will be acquired, along with other equipment relating to policing in Guyana.

The GNBS, earlier this year procured a Breathalyzer Test Bench, capable of verifying a wide range of breathalysers used by the GPF and other companies to test the alcohol levels of drivers and employees.

GNBS Inspectors were trained to provide the verification services by the supplier of the breathalyser equipment and by the Measurement Institute of Argentina (INTI).

In addition, over the past two years, the Bureau has trained 239 Police Officers in the use of Speed guns and breathalysers. The Bureau looks forward to working with the Police to ensure reliable measurements are made when administering the law.