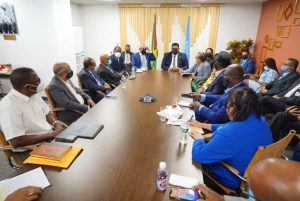 President Irfaan Ali meeting with Guyanese pastors who are based in Brooklyn, New York.

President Irfaan Ali has told Guyanese pastors, who are based in Brooklyn, New York, that his administration has not been engaging in racial discrimination.

““Our development programme is never tailored for any one ethnic group,” he told the pastors during his current trip to the United States (US) for the United Nations General Assembly.

The Guyana government has on a number of occasions sought to counter this narrative that appears to have caught the attention of three Democratic Congressmen who have made similar but veiled remarks.

The President added that his Government is opened to critique and that there will be a conference organised with the objective of hearing reports and fielding questions on its agenda.

Dr Ali told the overseas-based Guyanese about the importance of their role in fostering unity and tolerance as he elaborated on his campaign for the advancement of the One Guyana agenda.

The proposed One Guyana Commission, to be headed by Prime Minister Mark Phillips, is yet to get off the ground.

Noting his Government’s commitment to bringing all of Guyana together, the President said,  He then called on the Church to help in sustaining a dialogue based on the foundation of truth and building on institutional arrangements where “religious leaders unite and bring people together”.

He also spoke about his Government’s commitment to inclusivity with all stakeholders.

The Office of the President said the pastors welcomed the opportunity to speak directly with the Head of State and expressed their willingness to play their part in the promotion of national unity. They reportedly said they are interested in fairness, equal rights and the distribution of wealth to Guyanese.