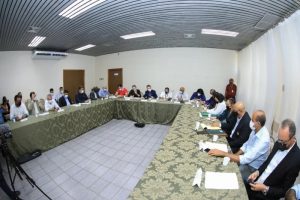 In this Folha BV picture, Guyanese and Brazilian officials meet in Boa Vista to discuss the protest in Bon Fim that has prevented trucks, laden with supplies for Guyana, from leaving Brazil unless Guyana reopens its border for Brazilians to come and shop.

The Guyana government has informed top officials of the  neighbouring Brazilian State of Roraima that the Lethem border would not be reopened to routine movement of persons, but would only allow the weekly turnaround of Brazilian trucks with supplies for businesses in Lethem in order to avoid a wider spread of the potentially deadly COVID-19 virus, a high-level source said.

Sources said that given the rising number of infected persons and deaths, the Guyana government is opposed to the reopening of the border to pre-COVID times about one year ago or at least thrice per week. “At this point in time, we cannot open the border to what it was pre-COVID. We believe that the arrangements that are currently in place are in order and that we would examine it,” the source said.

The Minister of Finance Dr. Ashni Singh and Minister of Health Dr. Frank Anthony journeyed to Boa Vista where they met with the Governor of Roraima State and other top officials, in an effort to address concerns.

Since the COVID-19 pandemic struck Guyana about one year ago, Guyana has shut off the Lethem Port and has been allowing the entry of trucks with food, cooking gas, chicken, eggs chicken and other supplies every Thursday up to the Customs processing point at the Lethem Port.

But for the past two weeks, numerous Brazilian trucks, with supplies destined for Guyana, have been blocked by protesters in Bon Fim, Brazil from entering Guyana to offload their cargo until Guyanese authorities agree to open the border to regular passenger traffic for Brazilians to shop in Lethem or move further into this country.

A well-placed source strongly believed that the protest is by Guyanese in Brazil and it is being instigated by business owners in Lethem who are keen on having more shoppers journey from Brazil. “They have some business people in Lethem who want this place to be opened fully and that must be done without any regard to the COVID pandemic and we can’t allow that so they are looking after their business interest without any consideration about what that can have on the pandemic.

President of the Rupununi Chamber of Commerce, Daniel Gajie on Saturday advocated for the border to be opened for at least two days. “The border can be partially opened for a day or two provided the relevant Covid19 monitoring systems are in place,” said, Mr. Gajie who, in July, 2021 had asked for a one-month internal lockdown of the Region to curb the spread of the virus.

He could not say whether businesses in Lethem were stoking the protests in Bon Fim.

The President of the Rupununi Chamber’s call for the border to be opened at least two days per week echoes a similar call by the Mayor of Bon Fim, Joner Chagas for the border to be opened on Fridays and Saturdays to only those who have tested negative for COVID-19 and they are fully vaccinated. “We also suggest putting a vaccination point inside the barrier. Of course, the person cannot move on the same day but at least we’ll be encouraging people to take the vaccine,” the Bon Fim Mayor was quoted as saying by Folha BV.

Latest official figures from the Ministry of Health show that Region Nine (Upper Takatu-Upper Essequibo) has recorded 2,288 COVID cases since last year March. Lethem’s population is estimated at 2,000 persons while the entire region has more than 24,000 persons.