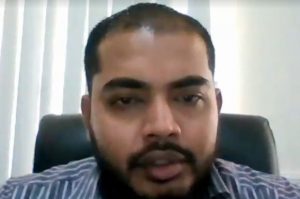 The Chairman of the Region Four Council, Daniel Seeram on Tuesday morning accused the central government of imposing a 2022 budget on the region at the last minute,  but the Regional Executive Officer Donald Gajraj said there is proof that the Chairman knew two months ago that budget has to be prepared.

Mr. Seeram said councillors are “always in the field” and so based on the needs of the region, the budgets for projects and programmes are formulated. He, however, said that the actual tabling of the budgets before the Council could only be done if the circular laying out the procedures is given to the Council.

In this case, the Regional Chairman said the Ministry of Finance’s circular was issued on July 31, 2021 but only emailed to him on September 2, 2021; the deadline for submissions having been on September 6.

“The Regional Democratic Council condemns the recent action of the REO and wishes to notify all and sundry that the submission of the proposed budget for Region Number Four is not a reflection of the will of the people of Region Number Four… Commandeering of the Regional Budget 2022 will not be accepted in any shape or form by the regional elected officials,” he told a news conference.

The Chairman said a special council meeting would be held on Friday, September 10, 2021 to discuss the issue of the budget and hopefully answers would be provided.

Mr. Seeram wants President Irfaan Ali to intervene in what amounts to a hijacking of the consultative process for crafting the Region Four budget, otherwise it would become clear that Central Government is flexing its dictatorial muscles.  Seeram’s A Partnership for National Unity+Alliance For Change (APNU+AFC) enjoys majority support in Region Four.

But the Region Four Regional Executive Officer says the minutes of a Regional Council in late July shows that the Regional Chairman and Council had been aware of the need to prepare the proposed budget. “If the Chair can produce to you the minutes of the July RDC (Regional Democratic Council) meeting, you would see that he had requested of the councillors to submit their proposals for the 2022 budget. It’s in there, it’s in the minutes so he knew before and, as councillors, you work on these projects throughout the year to be submitted. The document that I sent to him was a reminder of the date,” Mr. Gajraj told News-Talk Radio Guyana 103.1 FM/ Demerara Waves Online News.

Mr. Gajraj further states that Regional Councillors are aware that throughout the year they have to identify projects and programmes for next year’s budget.

The REO remarked that Regional Chairman presented an expenditure that included GY$9 million more than 2021- was presented “by him” to the Regional Administration. Mr. Gajraj questioned  whether Mr. Seeram discussed his budget with the Council or “unilaterally” requested GY$30 million.

The Regional Executive Officer says the Regional Chairman left Guyana without permission and without the knowledge of the administration. “When we were talking and planning about the budget, he was not in the country. At no time did he give me a letter that he would have been out of the country,”

Mr. Gajraj says all that Mr. Seeram had told him in a “two-minute talk” that he would have been “out of the jurisdiction” and would take the time to spend time with his family. “He never said where he was going. As the Clerk of Council, I understand that talk to be out of the jurisdiction to be approved by the Regional Democratic Council. That was never done,” the REO said.

Mr. Gajraj explained that permission to leave is granted by the Council and sanctioned by the Minister.  Mr. Seeram had been among several elected and non-elected representatives of the People’s National Congress Reform-led APNU who had journeyed to the United States where they had engaged in political activities.

The REO said the Neighbourhood Democratic Councils in Region Four, in keeping with a request, have submitted projects and programmes which “have informed” the Regional budget. “Within the region is covered but I don’t know what somebody is trying to deflect from some other issues, accusing the Regional Administration of not consulting with them; they were,” he said.

According to Mr. Gajraj, a number of councillors have said that they have submitted their individual proposals to him but he did not present it.