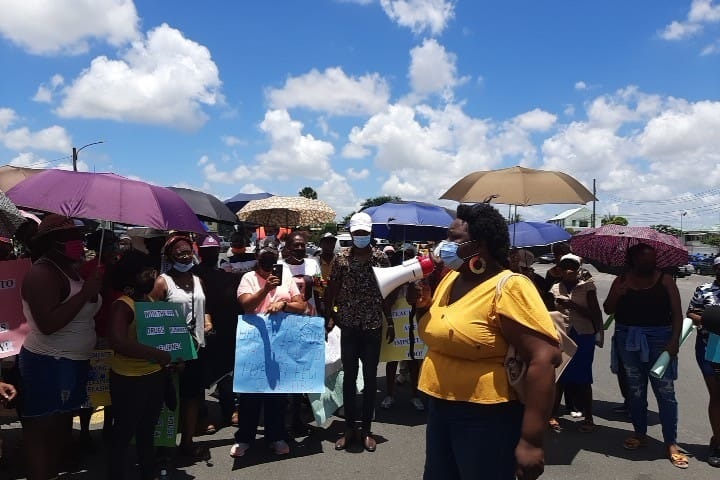 Odessa Primus addressing protesters at the Square of the Revolution

Several anti- vaccination protesters were Wednesday afternoon arrested as they were proceeding on Brickdam to the Ministry of Education’s offices, amid stiffer rules and enforcement for teachers and staff.

Police said eight persons were arrested as they marched west on Brickdam from the Square of the Revolution.

They were nabbed and put into a police police bus.

Sources said that up to late Wednesday afternoon the protesters were still in custody and they would be charged with illegal procession.

Among those arrested was Working People’s Alliance supporter, Kidackie Amsterdam who shouted “dictatorship, dictatorship”,  “I was protesting peacefully” and “it is my democratic right to protest” as he was in the bus. Amsterdam and a group of persons were protesting outside the Minister of Education Priya Manickchand’s office at 21 Brickdam. “My body, my choice”, “Our children, our future,” and “Who must go? Priya must go” were among the chants.

Police said the protesters were reportedly heading down Brickdam and were nabbed before they reached he 68 Brickdam location of the Ministry of Education where several workers were Tuesday ordered to leave because they were unvaccinated.

Amsterdam and and one other person were arrested outside the Minister of Education’s office at 21 Brickdam, police said.

Teachers are also being told to take the vaccine or a weekly COVID-19 test as a condition for going to work  but if they do none, they would have to stay home and would be marked absent.

Earlier Wednesday at least 100 protesters, including elected opposition politicians, held another of their weekly protests against efforts by government they regard as moves to pressure government workers to take a COVID-19 vaccine against their will.

Activist Odessa Primus, in brief remarks to the group of protesters at the Square of the Revolution, called for more persons to go out and protest against what they regard as mandatory vaccination.  “If we are coming out here and we need our message to be heard then we need to come out here in our numbers,” she said. “When you have numbers you can speak. They will have to listen to you.”

Ms. Primus flayed government for creating the conditions for teachers to stay away from school and so deprive children of their education. “When you send home all the teachers, who don’t want to be vaccinated, what is happening with  my children? You cannot stand up and say that you are government that cares about the people and you send home teachers,” she said.

She made it clear that the group of protesters were not there because they are supporters of any political party or are Afro or Indo-Guyanese. “People are here because we are against bullyism. We ain’t tekkin bully,” she said.