Guyana will press for compensation for African enslavement- President Ali 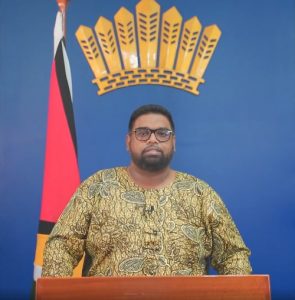 “Guyana will continue to support the efforts being made within the Caribbean Community to press for the convening of an international summit to demand reparative justice for the victims of the transatlantic slave trade, African enslavement, and its enduring effects,” he said.

United Kingdom (UK) experts had in the past had said that their country had been wary of the legal implications of granting reparations, but would instead prefer to continue financing social and economic developmental projects in its former colonies.

The President called for “a full and unconditional apology” from those responsible and/or who benefitted from the transatlantic trade in captive Africans and their consequent enslavement but he said that would not be sufficient.

“Reparative justice, however, cannot be confined to such an apology. It but must go further,” he said.

The African Cultural and Development Association, the International Decade for People of African Descent-Guyana– a United Nations-backed domestic initiative- and other interest groups have all been pressing for African reparations.

While there is a CARICOM Reparations Commission, the issue has never been mentioned in communiqués of the UK-Caribbean Fora .

The President sought to assure African Guyanese that that they would not be excluded or left behind in Guyana’s national development. “As we look to the future on this anniversary of Emancipation, I assure you, our African-Guyanese brothers and sisters, that you will not be excluded from or left behind in Guyana’s national development. Every citizen will benefit from the opportunities which are being unlocked. We want every Guyanese to be part of this development, sharing in its transformation and in its resultant benefits,” he said in apparent reference to Guyana’s rapidly emerging oil sector.

His  mainly Indo-Guyanese backed People’s Progressive Party Civic administration has often been accused of discrimination by Afro-Guyanese interest groups and the People’s National Congress Reform-led opposition coalition of A Partnership for National Unity+Alliance For Change (APNU+AFC).

The President credited African Guyanese for historically laying the groundwork for Guyana’s economy and their contributions today in a vast array of sectors and national life.