Yards at Wash Clothes, Mahaicony to be drained this week 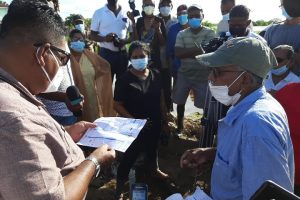 A resident of Wash Clothes, Mahaicony shows the Agriculture Minister Zulfikar Mustapha a drawing of the drainage problem and a suggested solution.

As engineers make efforts to drain the yards of more than 1,000 residents in the agriculture-dependent community of Wash Clothes, Mahaicony, the Minister of Agriculture Zulfikar Mustapha said the long-term plan includes addressing concerns about occupying the government reserve.

During his latest visit to the area on Saturday, the minister told flood-weary residents that engineers would this week build damns around flooded residences and pump the water out. “Those houses, those residences that are still under water, I have asked the engineer now to do a block empolderment and use pumps and pump the water out so that those people will not be in water from now on,” he  told farmers, explaining that in some instances several houses would have to be empoldered together.

Noting that about 350 houses have been affected by the now more than three-week long flood, he said every effort would be made to get the water out of residents’ yards because of concerns that they could contract diseases. “It’s a long time now and there are still some people who are still under the water and it’s very bad for  health reasons and also bad for the entire households and economic activity and things like that,” the minister said.

Chairman of the National Drainage and Irrigation Authority (NDIA), Lionel Wordsworth echoed the Agriculture Minister’s view that empoldering has  worked well in other flooded communities in Guyana. “We have successfully adopted this methodology across the coast and we were able to get positive results,” he said, even as he urged farmers and residents to cooperate and assist authorities to bring relief to the residents. 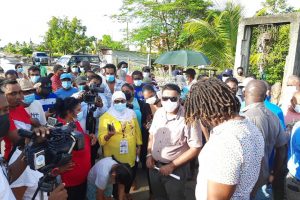 Responding to concerns among farmers that a number of them are occupying government reserves through which the water should drain, Mr. Mustapha said those issues would be addressed in the future as part of a strategy to minimise such severe floods in the future.

“You see this chap here, he is planting the reserve. You check this paper here,” a farmer told the Agriculture Minister as he gave him a copy of his drawing of the flood area depicting occupied reserves. “He is planting this reserve,” the farmer said.

But the Agriculture Minister, urged the farmers to work together for the immediate cause of draining the water from yards. “Let us not deal with personality conflict. We will deal with the issues that affect the community… The point is we will deal with it,” he said.

Farmers in the area have lost hundreds of acres of cultivated paddy, livestock and poultry to the flood waters that have inundated the area.