Killing of brother: Grieving mom always appealed to sons to “live in love” 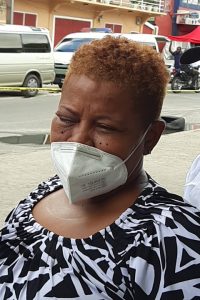 A distressed mother on Friday recounted that she had always appealed to her two sons to love each other and live as one, in the wake of of one of them killing another on Cummings Street, Georgetown during a heated argument.

“How I’m going to feel? I’m not feeling very well. I’m not feeling good about it. It’s not like I don’t talk to them. You all are brothers. You all must live in love; try to live as one; you come out from one womb. Don’t matter what is it. Live as one,” Sonia Chase told reporters.

Ms. Chase said her children, 27-year old Quincy Reynolds and 24-year old   Chase were arguing. She says Paul was killed by Quincy who she described as the “aggressor.”

Reynolds was arrested at the scene. 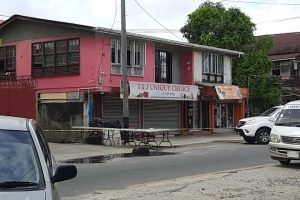 The building where the killing occurred.

Ms. Chase confirms that her left eye was swollen during the altercation.  She declined to say what weapon was used to kill Paul as she did not see.

The woman says it all started when she confronted Quincy about something she believed he had done because he was the only person who was usually there.

After he denied, she says she called her husband who told her to call the police and moments later she heard her one someone shouting “murder.” “As I putting on my clothes, there was a lady outside saying ‘no, no, ya’ll stop. When I come outside, I saw Paul started to bleed.,” Ms. Chase said.

The killing occurred inside a building housing several stores and once owned by former military officer, late Oliver Hinckson.

Police cordoned off the area until late Friday morning.